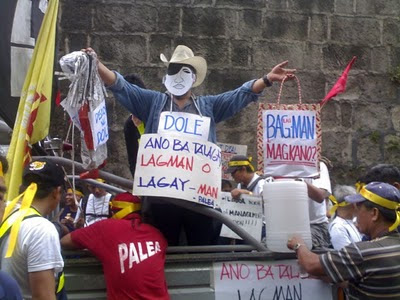 The Philippine Airlines Employees’ Association (PALEA) will hold a rally tomorrow at the Department of Labor and Employment (DOLE) to coincide with the filing of a motion for reconsideration against the decision penned by Acting Labor Secretary Romeo Lagman that found the planned PAL mass layoff to be a “valid exercise of management prerogative.” PALEA insists that the order is a “midnight decision that is faulty on both substantive and procedural grounds.”

PALEA demands that the new Labor Secretary to be appointed by President-elect Noynoy Aquino be allowed to decide on the dispute. More than 500 PAL employees will participate in the protest that will start with a motorcade from the PALEA office in Tambo, Paranaque City. A delegation of supporters from the Partido ng Manggagawa (PM) will join the rally at DOLE.

“The worst of crimes are indeed committed in the darkness of midnight. Lagman’s order is a midnight decision that was released with indecent haste given that the case has not been submitted for resolution and mediation proceedings are still ongoing. We insist that the incoming Labor Secretary be given the right to study and decide on the PAL-PALEA dispute according to procedure and on a just basis,” argued Gerry Rivera, PALEA president and PM vice-chairperson.

Rivera added that “Lagman’s June 15 order is faulty on both substantial and procedural grounds. It failed to consider the PAL-PALEA collective bargaining agreement’s provision prohibiting the outsourcing of jobs that are being performed by regular employees. Further the order came only four working days after PALEA filed a motion for the production of certain documents such as PAL’s latest financial statement and its outsourcing contracts with service providers. No action has yet been taken on the motion.”

PM chairperson Renato Magtubo slammed the decision for legitimizing mass contractualization and revealing the anti-labor legacy of the outgoing Gloria Arroyo government. Magtubo added that “This is the ugly face of contractualization in PAL. Regular PAL employees will become contractual workers in service providers who will be performing exactly the same job for less wages, fewer benefits and no security of tenure. It has happened before when PAL’s maintenance and engineering department was spunoff to Lufthansa Technik and MacroAsia, shell companies whose real owner is still Lucio Tan.”
Posted by Juan Manggagawa at 10:57:00 AM