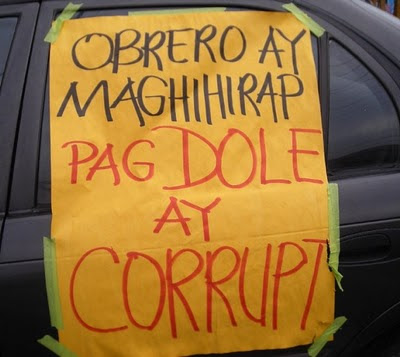 The Philippine Airlines Employees’ Association (PALEA) slammed as a “midnight decision” the order signed by Acting Labor Secretary Romeo Lagman that found the planned PAL spinoff as a valid exercise of management prerogative.

“Lagman’s decision was released with suspicious haste and preempted the ongoing mediation proceedings at the Department of Labor and Employment (DOLE). We wonder what reasons prompted him to make a decision just 15 days before a new administration assumes power and a new Labor Secretary is appointed,” declared Gerry Rivera, PALEA president and Partido ng Manggagawa (PM) vice-chairperson.

PALEA announced that they will file a motion for reconsideration and exhaust all the means provided by law to protect the job security and labor rights of some 3,000 employees to be laid off as a result of the planned spinoff of airport services, inflight catering and call center operations. The PAL union is also planning mass actions to protest the decision as Rivera explained that the DOLE’s decision is not yet final and executory.

The militant PM expressed its support for the fight of the PAL union. Renato Magtubo, PM chairperson, stated that “The DOLE’s decision, together with the measly P22 wage hike, exposes the real legacy of the Gloria Arroyo regime which is anti-labor to its last remaining days. The working class will remember the GMA government for legalizing mass contractualization and its cheap labor policy.”

Rivera argued that “Lagman’s June 15 order is faulty on both substantial and procedural grounds. It failed to consider the PAL-PALEA collective bargaining agreement’s provision prohibiting the outsourcing of jobs that are being performed by regular employees. Further the case has not been submitted for resolution and the order came only four working days after PALEA filed a motion for the production of certain documents such as PAL’s latest financial statement and its outsourcing contracts with service providers.”

Both Rivera and Magtubo criticized the decision for opening the floodgates for mass contractualization. Rivera added that “In truth PAL will not be outsourcing non-core functions but merely engaging in illegal termination. It will layoff thousands of regular employees who will be absorbed by so-called service providers which are owned by Lucio Tan’s Kamag-anak Inc. PAL’s regular employees will overnight become contractual workers and lose wages, benefits and job security even as they perform the same job as before.”
Posted by Juan Manggagawa at 12:30:00 PM

"There is clearly a good deal to know about this. I assume you created some good points in Capabilities also.Preserve operating ,good job!"

I got this site from my friend who shared with me on the topic of this web page
and now this time I am browsing this site and reading very informative posts at this time.


Here is my web-site: acai side effects

Hey there just wanted to give you a quick heads up. The words in your content seem to be running off the screen
in Safari. I'm not sure if this is a formatting issue or something to do with browser compatibility but I figured I'd post to let you know.

The style and design look great though! Hope you get the problem solved
soon. Cheers

Here is my web page www.massagechair-reviews.org


Feel free to surf to my blog post xtremeno

you are truly a excellent webmaster. The website loading
speed is amazing. It seems that you are doing any distinctive trick.
Moreover, The contents are masterpiece. you have done a wonderful activity in this
topic!

Feel free to surf to my web blog - hoodia balance

Hi there every one, here every person is sharing such know-how, therefore it's good to read this weblog, and I used to pay a visit this weblog everyday.

I have been browsing online more than 2 hours today,
yet I never found any interesting article like yours. It is pretty
worth enough for me. Personally, if all site owners
and bloggers made good content as you did, the internet will be a lot more useful than ever before.

Do you mind if I quote a few of your posts as long as I provide credit and sources back to your webpage?
My website is in the exact same niche as yours and my users would
definitely benefit from some of the information you provide
here. Please let me know if this ok with you. Regards!

I'm gone to inform my little brother, that he should also pay a quick visit this website on regular basis to take updated from newest gossip.

Take a look at my webpage buy zetaclear

For most recent news you have to visit world-wide-web and on internet I found this site as a finest site for newest updates.

What's up to all, the contents existing at this web site are genuinely awesome for people knowledge, well, keep up the nice work fellows.

That is very fascinating, You're an overly skilled blogger. I've joined your rss feed and look ahead to in quest of extra of your wonderful post.
Additionally, I have shared your web site in my social networks

Stop by my web page: eklablog.com

Your style is really unique compared to other people I have read stuff from.
I appreciate you for posting when you have the opportunity, Guess I'll just bookmark this web site.

Hey there just wanted to give you a quick heads up.
The words in your post seem to be running off the screen
in Firefox. I'm not sure if this is a format issue or something to do with internet browser compatibility but I figured I'd post
to let you know. The design and style look great though!
Hope you get the problem fixed soon. Kudos

Thank you for the auspicious writeup. It in reality used to be a
leisure account it. Glance complex to more brought agreeable from you!
By the way, how can we keep up a correspondence?

Good day very cool website!! Guy .. Excellent .
. Wonderful .. I will bookmark your blog and take the feeds additionally?
I am glad to find a lot of helpful information here within the post, we want work out
extra strategies on this regard, thanks for sharing.
. . . . .

I don't even know how I ended up here, but I thought this post was good. I do not know who you are but definitely you're
going to a famous blogger if you aren't already ;) Cheers!

my homepage - does hoodia work

Your method of explaining all in this paragraph is truly fastidious,
all be able to without difficulty be aware of it, Thanks a lot.