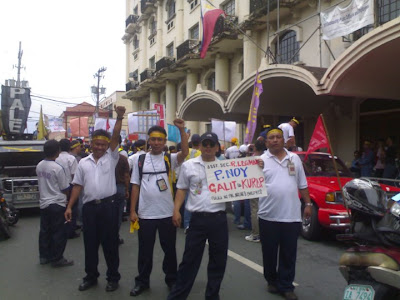 The Philippine Airlines Employees’ Association (PALEA) held another rally this afternoon at the Department of Labor and Employment (DOLE) in protest at the decision of Acting Labor Secretary Romeo Lagman that declared the planned PAL mass layoff to be a “valid exercise of management prerogative.” PALEA also filed a motion for reconsideration of the Lagman order in time for the deadline today.

Gerry Rivera, PALEA president and Partido ng Manggagawa (PM) vice-chairperson, insisted that “There are strong grounds to seek the reversal of Lagman’s decision.” PALEA assails the order as a “midnight decision that is erroneous on both substantive and procedural grounds.”

Some 500 PAL employees trooped to the DOLE around 3:30 pm today together with scores of supporters from PM. The protesters lambasted corruption at the DOLE as they carried placards that read “Kung walang corrupt sa DOLE, Walang manggagawang maghihirap.”

This is the second rally at the DOLE to protest the midnight decision. Last June 22, some 300 PALEA members held the first protest. Then on June 23 a delegation of PAL employees went to the Times St., QC residence of President-elect Aquino to deliver a petition asking him to intervene in the PAL dispute, cleanse the DOLE of corrupt officials and reform the policy regarding contractualization.

Rivera explained that “Contrary to the finding of Lagman, there is no spin-off of company departments in this case. No subsidiary corporation was formed by PAL and not one of its divisions was transformed into an independent company. What is involved here is outsourcing of functions wherein regular rank-and-file employees and union members will be terminated and the functions that they are performing will be farmed out to service providers.”

Rivera argued that “Further, contracting out, whether labor-only contracting or legitimate job contracting, is absolutely prohibited by the PAL-PALAEA collective bargaining agreement.”

“Finally there are no sufficient bases for retrenchment. Retrenchment is a measure of last resort which should only be undertaken in case of serious and imminent losses. A close review of the financial statements and disclosures of PAL reveals that its business condition is improving and not deteriorating, thereby negating the necessity for retrenchment,” Rivera said.
Posted by Juan Manggagawa at 12:21:00 PM