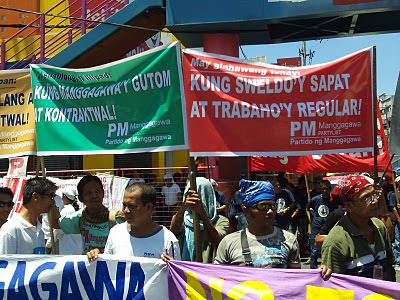 The militant Partido ng Manggagawa (PM) slammed the wage hike of P22 for Metro Manila workers as “loose change” and called for the abolition of the regional wage boards for “betraying the working class.” Renato Magtubo, PM chairperson, declared that “P22 is not even enough for workers to buy a kilo of commercial rice or even the cheapest NFA rice worth P25. Since the last wage hike was in June 2008, the wage hike is effectively P11 per year over two years. Na-onse na naman ang mga manggagawa."

He stated that “The wage hike exposes the real economic legacy of the Gloria Arroyo government—deepening poverty exacerbated by a cheap labor policy and lack of social protection. The 7.3% economic growth is a myth for the workers since they cannot partake of so-called progress.”

Magtubo also warned that “If the recommendation of the Department of Finance to increase VAT from 12 to 15 per cent is approved, then half of the wage hike will be wiped out. That is P12 or 3% of the new minimum wage of P404 will not go to the pockets of the workers and just possibly end up in the wallets of politicians.”

PM renewed its call for the abolition of the regional wage boards. “The wage boards have repeatedly betrayed the workers since they were established in 1989. The yawning disparity between the minimum wage and the cost of living is the clearest expression of a system failure,” Magtubo exclaimed.

The group also revealed that they will talk to the labor groups who sponsored or supported the P75 wage petition and discuss a campaign to reform the wage fixing system via the new Congress.

Magtubo explained that “Instead of the regional wage boards, we want a National Wage Commission formed with the mandate to fix wages based on the single criterion of cost of living. Despite the huge gap between the present minimum wage and the current cost of living, the National Wage Commission can achieve equalizing the two by a host of mechanisms among which are direct wage increases, tax exemptions, price discounts at social security subsidies for workers.”

According to a study by PM the cost of living for a six-member family in Metro Manila already reached P1,000 per day last April. “Even if two members of the family earn a living—the buy one, take one policy of the state—their combined income will not even be enough for a decent life,” insisted Magtubo.

He added that “Out of 19 million waged and salaried workers, only 2 million minimum wage earners will be directly affected by the wage hike. Of the latter, hundreds of thousands more will not enjoy the wage hike because of exemptions and deferments clauses in the wage order."
Posted by Juan Manggagawa at 10:06:00 AM