Laid off electronics workers camp out at Cavite export zone 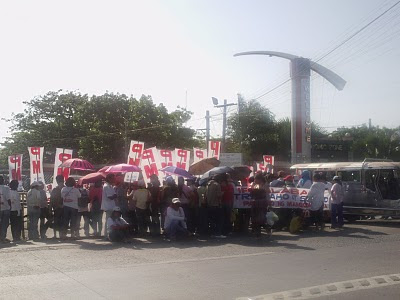 The laid off workers of Dyna Image Corp. Phils., an electronics factory at the Cavite Economic Zone (CEZ) in Rosario, Cavite, with supporters from the Partido ng Manggagawa (PM) picketed the export zone early this morning then setup a campout before noon. More than a hundred women members of the Samahan ng Manggagawa sa Dyna Image Corp. Phils. together with another hundred PM members started the protest as early as 7:00 a.m. at the main gate of the CEZ. The campout, the first ever setup at the CEZ, is an escalation of the series of protests conducted by the Dyna Image workers.

“The heat and humidity of the campout is small sacrifice for we are fighting for our jobs and our families. The meetings at the National Conciliation and Mediation Board (NCMB) have remained inconclusive since management refuses to consider workers demands for layoffs as a last option. We vow to continue the fight until our demands are met,” declared Virgielita Morite, president of the Dyna Image union.

The workers setup a makeshift tent outside the main gate of the CEZ after an impromptu intervention by Rosario Mayor Nonong Ricafrente proved futile. Mayor Ricafrente called the leaders of the Dyna Image union to his house upon learning of the picket. After he heard the workers’ grievances he called up the CEZ administrator to relay the workers demands to management.

“Mayor Ricafrente’s appeals to management however went unheeded as Dyna Image said that they can only offer 17 days per year of service as separation pay. They even blackmailed not just the workers but also Mayor Ricafrente by saying that Dyna Image will close shop if they accede to the workers demands,” explained Morite.

Dennis Sequena, a leader of PM in Cavite, explained that “We thank Mayor Ricafrente for his effort to mediate. The workers demand is reasonable; it is management that is being hardheaded.”

He also called on the police to respect the workers right to peaceful assembly and redress of grievance. Police mobile units have been checking on the campout although no attempt has been made to dismantle it. Another mediation meeting at the NCMB is scheduled on Friday.

The workers are demanding that management implement a last in, first out policy as regards the retrenchment. They also propose that working hours be reduced from the present 12-hour shift so that the 127 laid off workers can share the workload with the 450 workers inside the factory.

“The fact that workers are on overtime and production is in full blast belies management’s arguments that it is losing and so must dismiss workers,” Sequena insisted.

Last May 13, the workers picketed the factory premises inside the CEZ before marching out for a bigger protest at the main gate of the export zone with supporters from PM. Before that, the Dyna Image workers practically took over the NCMB extension office in Imus last April 27 in protest at their dismissal.

Also on April 26, the Dyna Image workers walked out of their factory after they were forced to receive separation pay from the company. Dyna Image is a Taiwanese-owned factory that produces parts for cellhone cameras. ###
Posted by Juan Manggagawa at 1:04:00 PM