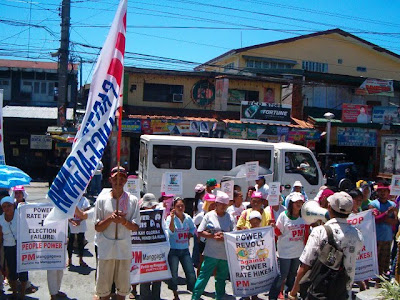 Despite the announced reduction in Meralco rates for the month of May, protests against high electricity rates continue. The protests went to the grassroots today as consumers in Paranaque picketed a nearby Meralco branch.

A hundred residents from different Paranaque communities converged at the Tambo branch of Meralco for the protest. The consumers are calling for a bigger reduction in the household electricity rates and a refund of the P15 billion overcharging since 2003 as revealed by a COA audit. Neighborhood associations of Tucuma, Sta. Cecilia, Fatima, Purok 7 in Multinational Village, Wakas and Damayan participated in the picket.

“The fight for lower electricity bills continues. We want a larger decrease in Meralco’s charge. We also want a refund of the overbilling by Meralco,” declared Michelle Licudine, a leader of party-list group Partido ng Manggagawa (PM) in Paranaque.

Yesterday PM members joined the Freedom from Debt Coalition in a picket at the Napocor main office and the Meralco branch in Kamuning, Quezon City. PM is calling on consumers to sustain the protest in the streets and in the internet against the high electricity rates despite the announced cuts by Meralco.

“Militant street protests complement the angry blogs, tweets and postings in the internet. Activists in the streets and in cyberspace unite!,” Licudine exclaimed.

She argued that “Public pressure should be put against Meralco and other utilities in the face of the failed regulatory functions by the government and the power firms’ greed for more profit. When regulation fails to protect consumers from corporate greed and abuse, street protests is a must option for the burdened consumers.”

The group assailed the failed promise of the Electric Power Industry Reform Act (EPIRA) for lower power rates. “Instead we are in the midst of a power crisis that even threatens to lead to a failure of elections. While people suffer daily brownouts, consumers have to face huge electricity bills. This is a double whammy that we do not to suffer,” Licudine insisted.

PM is calling for a reversal of the privatization of the power industry that was ushered in by the EPIRA. Licudine argued that “From its birth, EPIRA was burdened with an original sin and its evils are only now being revealed for all to see,” Licudine reminded. Former PM party-list representative in Congress Renato Magtubo led the expose on the multi-million payola attending the passage of the EPIRA in year 2000.
Posted by Juan Manggagawa at 10:25:00 AM