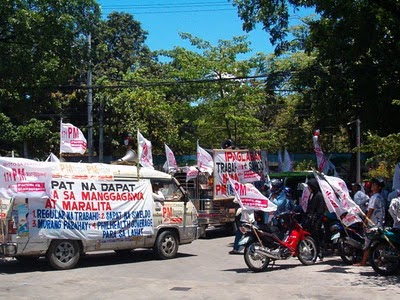 The labor party-list Partido ng Manggagawa (PM) announced that mass actions will push through on May 1 despite an executive order from Malacanang declaring instead May 3 as a non-working holiday. “All systems are go for the motorcade of 500 motorcycles with the theme ‘Sakbayan para sa Trabahong Regular at Dagdag Sahod.’ Labor Day is celebrated all over the world on May 1 and no order from Malacanang can change that,” asserted Renato Magtubo, PM chairperson.

“Divide and rule tactics not holiday economics are the real motive for shifting the observance of Labor Day to May 3 instead of May 1. Gloria Arroyo wants to split the labor movement and sabotage the militant protests planned for May 1. We call on the different labor federations and centers to continue with their May 1st activities. The labor unity rally at Mendiola will push through,” Magtubo insisted. He clarified that PM-affiliated labor unions are already negotiating with their respective companies so they can join the May 1 protests.

The group said that the May 1 motorcade will converge by 7:00 a.m. at the PAL In Flight Center along Airport Road in Paranaque to highlight the massive layoff of 3,000 Philippine Airlines workers. A short program will be held in which Gerry Rivera, PAL Employees Association president and PM vice-chairperson will be the main speaker. The motorcade will then proceed to Mendiola for a joint program with other labor groups by 10:00 a.m.

PM had already secured a permit from the Manila City Hall for a rally in Mendiola from 9:00 am to 12:00 noon on May 1. Two PM leaders attended a dialogue with police officials last April 23 and coordinated with the authorities the traffic issues concerning the May 1 motorcade. Representatives of PM are also negotiating with aviation security for the protest near the Centennial Terminal of the airport from which PAL operates.

Magtubo explained that the demand for a wage hike and regular jobs will be the focus of the Labor Day protests. He elaborated that “Malacanang’s announcement that no wage hike is forthcoming on Labor Day shows this regime’s anti-labor character up to the bitter end of its term. Moreover the retrenchment at PAL and others such as the dismissal of 450 workers at the Dyna Image electronics factory in the Cavite export zone expose the reality about the jobs situation. Such mass layoffs more or less cancel out the 18,000 new jobs that government boasts will be created in the Labor Day job fairs in Metro Manila. One thread connects the mass layoffs and job fairs—they are just two faces of contractualization. Regular jobs are being destroyed and replaced by contractual work in which wages are cheaper, benefits are fewer and security of tenure is abolished.”

The motorcade will have participants coming from riders clubs from Calabarzon and motorcycle-riding unionists from PAL, Marikina and Valenzuela. PM will also lead May 1 rallies in Cebu City, Bacolod City, Iloilo City, Iligan City and Davao City.
Posted by Juan Manggagawa at 11:42:00 AM

By the way, have you ever heard about yummy-cebu.com? I hear they just started a new contest called Mama's day out!