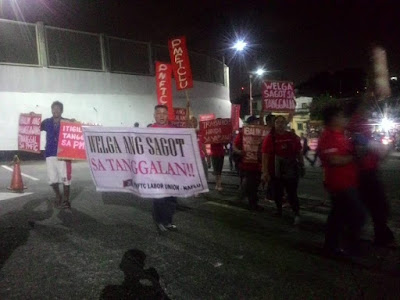 Production at the leading cigarette firm in the country is paralyzed as a strike started last night. Several weeks of mediation called by the Department of Labor and Employment failed to produce a settlement as the management of Philip Morris Fortune Tobacco Corp. (PMFTC) refused the demand of the union for the reinstatement of retrenched workers. Workers at the giant Marikina factory walked off the job around 6:00 pm last night, marched around the factory and started building a picketline.

“If the company wants to resume operations then management must reinstate the workers terminated due to the sudden closure of the Vigan redrying plant and the mass layoff at the Marikina factory,” stated Rey Almendras, union president of the Philip Morris Fortune Tobacco Labor Union (PMFTCLU-NAFLU).

The labor dispute at the leading cigarette manufacturer is part of a rising wave of workers unrest. Scores of notices of strike have been filed and strikes are erupting in various companies.

“The Constitution mandates that workers receive their fair share of the fruits of production. But at PMFTC, retrenchment was the company’s reward for increased labor productivity and workers meeting key performance indicators,” argued Almendras.

PMFTCLU is alleging unfair labor practice over the closure and retrenchment. The union slammed the bad faith and deceit attending the so-called right-sizing plan of management. The group believes that union busting is the real agenda as the non-union sister factory in Sto. Tomas, Batangas just regularized 100 contractual employees. In contrast, the Marikina and Vigan plants are both unionized factories. Moreover, the Vigan plant is now being operated by a new entity but with contractual workers.

“Management has been absolutely opaque behind the misnamed right-sizing plan. When management first discussed the plan before the union, they withheld the names of workers affected, they did not disclose how the termination process will proceed and finally they did not give any solid basis for the closure and redundancy. And then just hours after the meeting with the union, management unveiled its surprise gift to unsuspecting workers who were cajoled into signing separation without the presence of union officers who barred from entering the factory,” Almendras elaborated. ###

Photos of the strike can be accessed at PMFTCLU’s Facebook page: https://www.facebook.com/zpipsamonte/