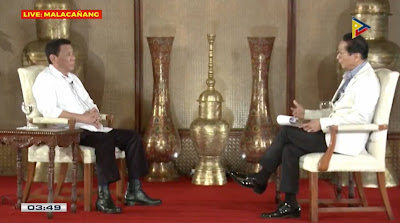 The Duterte-Panelo “talk show” yesterday at Malacañan Palace did not address what workers and the poor desire to hear from the President: tangible solutions to the rising prices of rice and other basic commodities that have impacted negatively on income and the cost of living.

Worse, the President blamed workers strikes for lack of foreign investors. It is such a lame excuse. Investors invest in a country primarily because of profitability and political stability. Moreover, a strike—though a guaranteed workers’ right under the Constitution—is highly regulated by the government. Thus it will not be a major factor to affect the country’s stability and employers’ profitability. In most cases, a strike occurs because of employers’ unfair labor practices and the deprivation of workers’ just share in the fruits of their labor.

The “talk show” was primarily designed to strike back against Trillanes— laying the ground for the government to make the arrest after the Supreme Court referred the latter’s case to the Makati regional trial court. The address was not about arresting problems brought about by runaway inflation.

Moreover, the “talk show” tried to sow fear in the public’s mind based on an imagined destabilization plot against his government. The President by “selling hard” his theory of destabilization plot has exposed his real aim of “an authoritarian rule” in order to effectively govern the country.