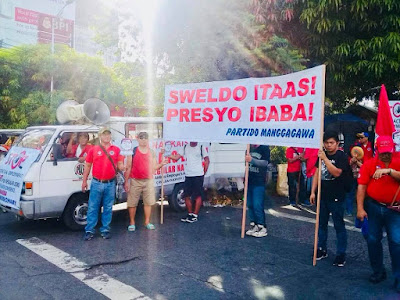 “Wages must be increased across-the-board nationwide to cope with inflation. Charter change must also be stopped for it will lead to the deterioration of labor rights,” declared Rene Magtubo, national chair of PM.

He added that “Contrary to employers’ opinion, the five-year high inflation in June of 5.2% constitutes a supervening event that should trigger a round of wage increases. But instead of regional wage boards acting in the face of worsening inflation, we call on President Duterte to use his SONA speech to call on Congress for a legislated salary hike. Further, we challenge him to make good on his promise to abolish regional wages and institute a national minimum wage.”

The group is concerned at the proposed new constitution approved by the Constitutional Committee tasked by President Duterte to draft the shift to federalism. PM vowed to mobilize workers in a campaign against the charter change.

“Aside from the loophole that allows for term extension for the sitting president, the draft charter dilutes the rights of workers guaranteed under the present Constitution. Instead of strengthening labor and human rights, they are degraded in the anemic language of the draft Constitution,” Magtubo pointed out.

PM noted that the draft charter dropped explicit recognition of workers’ rights to collective bargaining, to peaceful concerted action including strike, to humane conditions of work, to participation in policy making processes and to labor’s just share in the fruits of production. The group saw similar weakening in the language of protection for human rights and recognition of rights for other marginalized groups in the proposed charter.