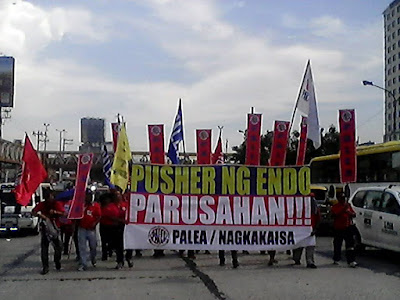 The workers group Partido Manggagawa (PM) called on the Department of Labor and Employment (DOLE) to deputize union officers as labor inspectors to assist in the campaign to end endo. “By deputizing labor leaders, the number of inspections of establishment using subcontracting schemes can be multiplied overnight, enforcement can be strengthened immediately, and hundreds of thousands of contractual workers can be regularized as a result,” asserted Rene Magtubo, PM national chairperson.

PM also supported the proposal of the Trade Union Congress of the Philippines to criminalize violations of laws and regulations on contractualization. “Still employers and their contractors must first be found guilty of violations and thus we urge the deployment of union officers as labor inspectors to level up the enforcement and compliance system,” Magtubo argued.

He added that “If Labor Secretary Silvestre Bello’s target of reducing contractualization in half by the end of the year, then the present cadre of some 600 labor inspectors must be beefed up by trained and motivated volunteers from the workers movement.”

In response to employers’ opposition to the criminalization, the group finds nothing controversial about jailing violators of labor laws and regulations. “Former Labor Secretary Rosalinda Baldoz already proposed criminalizing breaches of occupational health and safety standards in the wake of the Kentex fire that killed at least 72 workers and employers did not threaten to relocate to Vietnam or Cambodia to evade incarceration,” Magtubo reminded.

He explained that “Let us not forget the lessons of Kentex. The Valenzuela factory was found compliant after three site inspections by a DOLE labor inspector who mechanically followed a checklist but did not go beyond it, like for example verifying if the manpower agency used by Kentex was duly registered, which in fact it was not. A determined union officer deputized as labor inspector would not make the same mistake.”

According to the DOLE, in October 2011, a month before the issuance of DO 18-A which regulates the practice of subcontracting, there were 200,000 contractual workers under 2,624 registered subcontractors. “Needless to say, this data is grossly incorrect and patently underreported to put it mildly. In a succeeding 2012 survey by the Bureau of Labor and Employment, 30.5 percent of total employment of 3,769,259 (based on establishments with 20 or more workers) or more than 1 million are non-regular workers, meaning apprentices, probationary, seasonal, casual and project-based workers. In the same survey, one third of factory workers were found to be contractual. DOLE’s labor inspectors alone would be overworked to finish inspecting the working conditions of more than one million contractual workers.”

“We call on DOLE to train union officers in the labor inspection and enforcement process and then accredit them appropriately,” Magtubo added