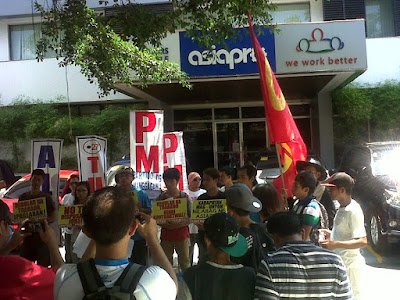 In response to the Department of Labor and Employment’s declaration that more than 5,000 contractors are to be assessed this year, the labor group Partido Manggagawa (PM) asked that Asiapro, the country’s biggest workers cooperative, be first in line for inspection. Asiapro Multi-Purpose Cooperative, according to its website, deploys between 33,000 to 35,000 workers in more than 200 clients, among them multinational agribusiness firms Dole and Del Monte in Mindanao.

“Just by the sheer scale of Asiapro’s operations, the assessment and inspection should start with it. Moreover, Asiapro’s ‘worker coop’ model has been an object of controversy, to put it mildly, and has been the subject of legal cases and labor disputes. We urge the DOLE to seriously investigate if Asiapro is compliant with existing laws and regulations, specifically the prohibited practice of labor-only contracting,” stated Rene Magtubo, PM national chair.

He added that “It boggles the mind that one cooperative can have the expertise and the tools to engage in a full spectrum of businesses from agribusiness to real estate to manufacturing to merchandising and retail, and even mining. Only in the Philippines!”

Labor Secretary Silvestre Bello was quoted as saying that the DOLE’s initial target was 5,150 registered subcontractors and their 26,194 principals. “Of the 416,343 workers deployed by contractors according to the DOLE, Asiapro alone accounts for almost 10%. Asiapro is as big as a contractor can get,” Magtubo exclaimed.

He elaborated that in Asiapro’s operation in the hauling company Galeo which in turn is a contractor in the Carmen Copper mine in Toledo City was instructive of how the ‘workers coop’ works. “In 2014, workers at Galeo tried to form a union but were stopped by a TRO since Asiapro claimed that the employees were their members. Later, Galeo dropped Asiapro as subcontractor and engaged another ‘worker coop,’ but it was still these same workers who were driving and manning Galeo’s trucks, despite the changes in their alleged employers,” Magtubo insisted.

As a coop, Asiapro only has 473 regular members who have full rights, including right to vote and be voted but 98% of its members are associate members with no similar rights. It is the latter who are deployed as workers in Asiapro’c clients. Asiapro does not pay wages to the workers it deploys but a gross share in the profit of the service contract entered with the client. Still the gross share is always equal to the minimum daily wage in the region multiplied by the number of days worked.

“The Supreme Court has once declared that Asiapro’s associates are actually its workers by virtue of the four-fold test, that is, Asiapro has the power to hire, fire, pay wages and control the means and method of the work,” Magtubo reminded.