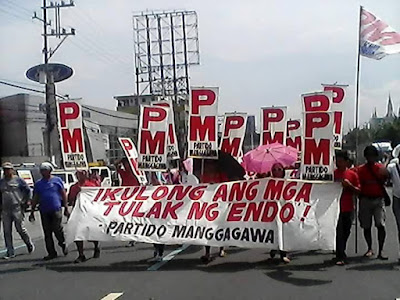 The labor group Partido Manggagawa (PM) urged the Department of Labor and Employment (DOLE) to conduct an inspection of all existing labor contractors in the wake of a directive released last week ordering the suspension of registration of new subcontractors.

“We welcome the DOLE Department Order 162, Series of 2016 and Labor Advisory 10, Series of 2016 as the new administration’s cautious first step in ending endo. But we call on the DOLE to make the bold next move of reviewing all prevailing subcontractors to ensure compliance with laws and regulation,” declared Rene Magtubo, PM national chair.

He added that “Should existing service contracts and subcontracting schemes be found in breach of labor laws and regulations, especially the so-called control test, then the contractual workers must be given justice and made regular employees.”

Dated July 25, 2016, DOLE Department Order 162, Series of 2016 and Labor Advisory 10, Series of 2016 suspended the registration of new contractors, reaffirmed the prohibition on labor-only contracting, and reiterated the visitorial and enforcement powers of the Labor Department.

“DO 18-A, issued in 2011 in the wake of the outsourcing dispute at Philippine Airlines which remains pending to this day, already outlaws the pernicious practice of the laying off contractual workers before six months but lax implementation by the DOLE has allowed the worst forms of contractualization to continue. But DO 18-A is itself worthy of review and must be superceded by stricter regulation should the Labor Code be amended once the Security of Tenure bill is enacted,” argued Magtubo.

Aside from the inspection of existing registered contractors, among the proposals submitted by PM and CLC are the certification by the president of the Security of Tenure bill, urgent resolution of all pending labor cases and disputes involving contractualization, deputization of labor unionists as labor inspectors, information drive among workers and employers on labor rights especially security of tenure, and consultation with labor groups to forge cooperation on ending endo.