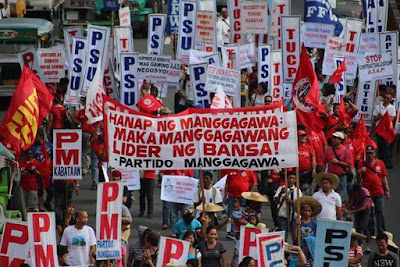 Members of PM ripped copies of temporary employment contracts and pay slips with withholding taxes in a symbolic reenactment of Bonifacio’s tearing of the hated cedula that started the Katipunan’s revolution against Spanish colonial rule.

“We condemn the epidemic of contractualization perpetrated by capitalists to demolish labor standards and lambast the government for killing the proposed tax cuts that would have raised the take home pay of workers,” Magtubo argued.

PM joined other workers groups in the Nagkaisa labor coalition in a several thousand-strong march from UST Espana to Mendiola. Mobilizations in cities like Cebu, Bacolod, Tacloban, Davao and General Santos picketed ticketing offices of Philippines Airlines in a show of solidarity for 117 employees who were victims of a recent mass layoff. The union Philippine Airlines Employees Association (PALEA) has a pending notice of strike over the latest retrenchment.

Magtubo explained that “Giving tax breaks to wage earners is not a loss to the government because increased take home pay leads to bigger spending for goods and services. Such will spur growth in manufacturing, agriculture and services sector, and thus enlarge tax collection by the government.”

With the Paris COP21 talks on climate change about to start, the Bonifacio Day appeals by workers also included calls for climate justice, climate jobs and just transition. “Labor’s demand for decent work is integral to adaptation and mitigation as people with regular employment and social insurance are better prepared to face recurring disasters,” Magtubo elaborated.

There was also an internationalist angle to the local celebration of Bonifacio Day as workers of Korean companies based in the country expressed solidarity with the Korean labor movement which has been the subject of raids and arrests by the government of Park Geun-Hye. Placards signed by the workers unions of Tae Sung Phils. in Cavite and KEPCO Cebu read “Solidarity with our brothers and sisters in the Korean labor movement! Stop the raids on union offices and arrests of labor leaders! No to state repression!”

PM vowed to continue solidarity actions for the embattled Korean labor movement even as the group criticized Korean companies in the country for union busting and unfair treatment of workers. The partylist group cited the labor disputes at Tae Sung and KEPCO Cebu and also the deaths of dozens of workers at the giant Hanjin shipyard in Subic to buttress its point.
Posted by Juan Manggagawa at 6:41:00 AM