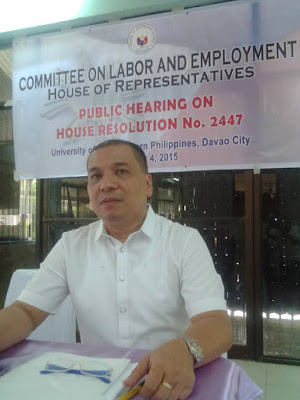 At a congressional inquiry by the House of Representatives Labor Committee yesterday, the Philippine Airlines Employees Association (PALEA) demanded that Philippine Airlines (PAL) recall the latest mass layoff and reinstatement the 117 fired employees. PAL responded by announcing that the termination of the affected workers is being delayed from November 9 to November 30, giving them three more weeks of work.

“Since PAL has not conceded to our demand for the recall of the illegal dismissals, PALEA’s notice of strike stays. So the work stoppage that will impact PAL flights and operations may happen later this month,” stated Gerry Rivera, PALEA president and a Partido Manggagawa bet for the party-list elections.

PALEA did not push through with the planned strike during the undas holidays in deference to conciliation proceedings called by the Department of Labor and Employment (DOLE). Another conciliation meeting is scheduled on November 10.

The congressional hearing was held in Davao City and presided by Rep. Karlo Nogrles. In response to queries on the status of the duly elected PALEA officers led by Rivera, DOLE Undersecretary Rebecca Chato testified in the hearing that pending final resolution of the intra-union cases, the status quo remains and thus current union officials are the legitimate representatives and bargaining agents of PAL ground employees.

“USec Chato’s clarification of labor law and jurisprudence should be a wakeup call to management to stop its unfair labor practice of disregarding PALEA and talking directly to union members, such as what happened in the termination of the 117 employees,” Rivera explained.

Representatives of factions that contested the leadership of PALEA also attended the hearing. Leaders of these factions lost in the PALEA union elections last February that was won by the slate of led by Rivera. Two petitions were filed at the DOLE by the losing candidates after the elections. Last month, some of the petitioners filed another case asking the DOLE to disregard the pending notice of strike by PALEA.

Rivera averred that “All these PAL employees who are noisily attacking PALEA’s fight against contractualization but who are suspiciously silent on the mass firings by PAL are being exposed as lackeys of management.”

“Since 1998, more than 8,000 PAL regular employees and union members have been fired and replaced by contractual workers who labor for longer hours but are paid less in wages and benefits, and work without a voice in the workplace. Thus even during times when PAL says that it is losing money, airline service providers owned by Lucio Tan and his family remain extremely profitable,” Rivera revealed.

Aside from the propriety of the latest round of retrenchments at the national flag carrier, the congressional inquiry also discussed PAL’s refusal to open collective bargaining negotiations for the last 17 years and to implement the terms of the settlement agreement to end the outsourcing dispute of 2011. PALEA had repeatedly asked PAL to start CBA talks and fulfill the re-employment provision of the settlement deal to no avail.