There is ‘tamang daan’ to solving climate crisis – Partido Manggagawa 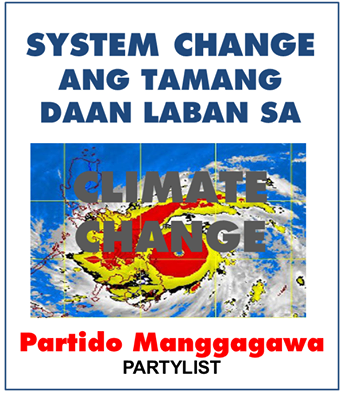 Workers believe that living on low-carbon diet is the only chance for Mother Earth to survive the climate crisis.  And the only way to achieve lower carbon economy is by significant cutback in industrial activities that emit megatons of greenhouse gas (GHG) into the atmosphere.
The partylist Partido Manggagawa (PM) expressed this view as it joined the multisectoral March for Climate Justice this morning at the Quezon Memorial Circle, together with labor coalition Nagkaisa.
Among the workers’ demands were climate jobs and climate resilient communities as well as decent work as they believe that people with regular employment and social insurance are better prepared to face recurring disasters.
Partido Manggagawa, however, believes that resilience is mere adaptation to lessen the impact of calamities and therefore cannot be considered as the ultimate solution to climate crisis.
“Capitalist industries created this crisis.  The solution therefore lies on whether this world will continue living under capitalism or it maps the right path to solving this crisis,” said PM in a statement.
The group said a handful of industrial powers which contribute more than two-thirds of global GHG emissions will never give up their global trade position in oil and energy production, mining, car manufacture as well as their control of other hard industries that largely pollute the environment.
“They will just invest on ‘clean technology’, trade their carbon footprints, monetize nature by seizing control of the renewable energy market and then negotiate for business-as-usual bottom lines.  Thus, the Paris negotiation may produce concrete national commitments this time but never will rich capitalist countries seek an end to climate crisis,” the group said.
According to PM, plotting a way towards the tamang daan (right path) in addressing the climate crisis requires a change to both the economic and political system.
“The crisis is really a question of power – of who decides what is good for whom? The capitalist ideology of free market, which in business translates to freedom of owners of capital to exploit labor and nature to gain profit to the max is a development hoax. It allows unlimited growth to corporations at the expense of people and nature.”
PM said under the tamang daan, people will be at the center of all development endeavours while nature will be consigned by the majority to common use for the common good of humanity.
“Workers do have a name for this tamang daan. Socialist parties in Latin America and Europe call it the 21st century socialism,” concluded PM.