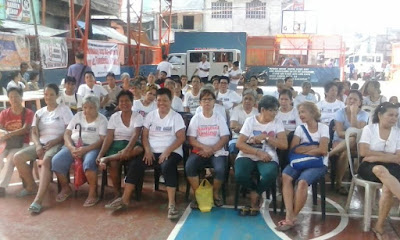 Amidst concerns from some quarters that the vice presidential candidacy of Sen. Ferdinand “Bong Bong” Marcos, Jr. would pave the way for the return to Malacanang of the former dictator’s family, retired workers of La Tondena Inc., commemorated the 40th anniversary of the historic first strike under martial law. About a hundred participants to the strike gathered in a basketball court in Tondo, Manila last October 24 to keep up the legacy of the famous workers struggle.

“Beyond renewing the bonds of friendship and camaraderie among La Tondena strikers, we believe the lessons of the first strike under the Marcos dictatorship should be passed on to the new generation. We are dual citizens now, senior citizens aside from being Filipino citizens, but we have to impart to the younger workers the ideals, hopes and traditions of the workers’ movement,” explained Benjie Roxas Jr., a participant to the 1975 strike and present leader of the Tondo chapter of the party-list Partido Manggagawa (PM).

In October 24, 1975, some 800 workers of La Tondena stopped work and held a sit-down strike to demand the regularization of contractuals and the reinstatement of retrenched temporary workers. With the support of the workers’ community around the factory and the solidarity of nuns, priests and seminarians, the strike lasted for 44 hours before being suppressed by the wholesale arrests of hundreds of strikers. But the strike did not end in defeat, as the then owners, the Palancas, conceded to some of the workers’ demands, including the regularization of 300 contractuals.

La Tondena was eventually bought by the San Miguel conglomerate and the union did not survive the closure of the Tondo factory in 1994. The company was renamed Ginebra San Miguel Inc. in 1987 and today two factories in Cabuyao, Laguna and Sta. Barbara, Pangasinan make most of its products.

In last year’s remembrance of the La Tondena strike, Gerry Rivera, president of the union Philippine Airlines Employees’ Association (PALEA) and PM vice chair, spoke before the retired workers. He recalled that “As I paid my deep respects to the brave La Tondena strikers, I emphasized how strikingly similar their demands and struggles were to the present fight of workers, including ours in PALEA, under the conditions of trapo democracy instead of martial law.”

Arguably the biggest labor dispute for the past several years, PALEA has been opposing contractualization at Philippine Airlines and has garnered the support of the Catholic Church among others. “Protesting PALEA members were forcibly evicted and bodily carried too by armed guards and police from the airport in 2011, just like how La Tondena workers were hauled in Metrocom buses in 1975. We dare to win too like the La Tondena strikers and defeat contractualization eventually,” Rivera ended.