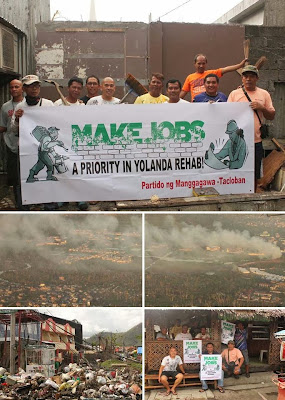 Yesterday a motorcade of a hundred tricycles garbed in tarp posters with the message “Make jobs a priority in Yolanda rehab,” went around Tacloban City and were warmly received by typhoon survivors. The motorcade signaled the launch of the campaign for decent employment, social protection and people’s participation as bedrocks of Yolanda rehabilitation and reconstruction plan.

“Yolanda survivors should be treated as citizens not beggars. It behooves Ping, rehab agencies and donor countries to engage with the informal workers in the reconstruction plan. Inclusive growth is mere lip service, people empowerment is just a buzz word without the actual participation of organized groups at the grassroots,” insisted Wilson Fortaleza, PM spokesperson.

Before the motorcade, the tricycle drivers attended a noon mass at the Sto. . A gathering and small salu-salo followed the motorcade at the church’s social hall where family members and other Yolanda survivors gathered to hear the groups’ manifesto and affirm their commitment to the collective struggle of rebuilding their lives and their communities.

“In the rehabilitation and rebuilding process, we do not want to just revert back to where we were before Yolanda. We want a new community–a better community,” declared Judy Torres, PM-Region 8 coordinator and chair of the Tacloban Federation of MCH (Motor Cabs for Hire) Drivers and Operators Associations, Inc. (TAFEMDO).

The campaign came days after the government announced the US$8.17-billion or P361-B plan under the so-called Reconstruction Assistance on Yolanda (RAY) which will be completed in four years.

In a joint manifesto signed by TAFEMDO, Trisikad Operators and Drivers Organization of Hilongos, , Rebolusyonaryong Alyansang Makabansa-Region 8 and PM, the groups explained that prior to the onslaught of Yolanda, they were already living miserable lives since transporting people around the city through motorized and non-motorized cabs for hire was their only source of income.

“Our priority demand is decent jobs because it is a guarantee to a person’s long-term security and a life of dignity,” said Torres, adding that while everybody was devastated it is the poor that suffered most.

He added that “Today’s extreme weather systems are the awful outcome of climate change caused by unrestrained economic activities of industrial countries. Thus, we believe that more than the humanitarian aspect, developed countries have the historical, moral, and social responsibility to come to our aid.”
Posted by Juan Manggagawa at 12:27:00 PM