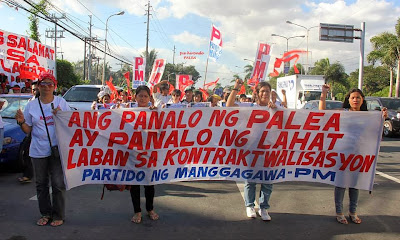 Undoubtedly the biggest labor story for the year was the settlement of the long-running dispute between Philippine Airlines (PAL) and the Philippine Airlines Employees Association (PALEA). It hardly made it to the news though as the historic deal ran smack of biggest story of the year—supertyphoon Yolanda. At the height of Yolanda and with howling winds buffeting their picketline, PALEA members voted to ratify the agreement.

The settlement provides for the rehiring as regular workers of some 600 PALEA members who were retrenched in 2011 but refused to accept the outsourcing scheme. The process of PALEA members applying for re-employment has started and PAL is mandated to give them priority for hiring in regular positions. The agreement also grants an improved separation package of 200% per year of service and P150,000 in gratuity pay.

The victorious resistance of PALEA against contractualization and the vigorous campaign it has engendered puts into question the popular view that precarious work is a global trend that cannot be rolled back. In fact just weeks after the PAL-PALEA agreement was signed, 500 contractual mining workers in won regularization after mass actions by the union PAMCC. The PAMCC union in the Toledo City-based Carmen Copper Corp., one of the biggest mines in the country, was active in the PALEA solidarity campaign in and was directly inspired by the outcome of the PAL dispute.

Indeed well before the settlement was signed and just two months after the implementation of the outsourcing plan, the dispute already changed the landscape of industrial relations. In November 2011, the Department of Labor and Employment issued DO 18-A to spell out new regulations over contracting and subcontracting arrangements arguably in the face of an outcry from organized labor about the retrenchment of 2,400 workers at PAL.

Labor groups, both in the country and abroad, have hailed PALEA’s victory as a victory for all workers. Meanwhile PALEA has expressed its gratitude for the fervent solidarity of workers, community and Church groups which launched protests, lobbying and a boycott campaign. While difficult to assess, the boycott contributed to PAL’s P2.19 billion in losses due to reduced passenger revenues just for the first half of its latest fiscal year.

PALEA’s campaign combined old school tactics of struggle and modern means of organizing solidarity. PALEA’s fight struck a sympathetic chord in the international labor movement and thus two global days of actions involved protests in airports and embassies across four continents. PALEA members used Facebook to maintain contact, exchange ideas, call for action and solicit support. PALEA was a trending topic on Twitter in the immediate aftermath of the airport protest as allies and critics debated in cyberspace, and again during the impeachment trial of the Supreme Court Chief Justice when it was exposed that he received “platinum cards” as gift from PAL.

The coming year will see how far the outcome of PAL-PALEA labor dispute can reverberate outside industrial relations at the flag carrier.
Posted by Juan Manggagawa at 1:10:00 PM

H1B consultants in Delhi are documented for h1b visa process for the candidate H1b consultants in Delhi round the India, we've got several guys operating in USA went through us to united states of America and with the assistance people H1B work Visa consultants Delhi they need designed their career and leading a effective life. obtaining H1b work visa is not so powerful job if you consult U.S.A. at any time.