P4.15/kWh power hike is bonus for doing nothing – labor group 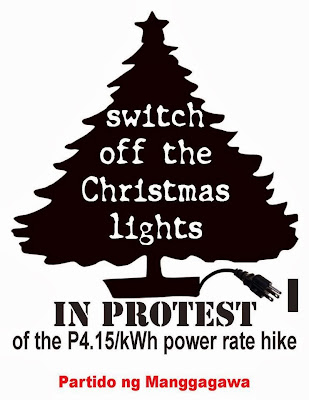 Just for doing nothing, Meralco and several generation companies (Gencos) were rewarded a whooping bonus of P4.15/kWh, the labor group Partido ng Manggagawa (PM) said in a statement.
According to PM, the impending increase, the highest in the country’s history and in the world, could have been avoided had Meralco and gencos planned for replacement power to address the expected load gap from Malampaya’s scheduled regular maintenance.
“But in a privatized industry regime under EPIRA, power utilities earn handsome profit just by doing nothing and even during times of calamities. Power utilities like Meralco control the whole industry from generation to transmission to distribution and can thus exercise monopoly pricing limited only by what the market can absorb, meaning what the consumers are willing to pay in exorbitant electricity costs,” said PM spokesman Wilson Fortaleza.
About 2,700 MW of power from Sta. Rita, San Lorenzo, and Ilijan plants were lost due to the shutdown of Malampaya. Luzon needs at least 6,000 MW to meet its peak load demand.
“Imagine a deficit of 2,700 megawatt, an anticipated crisis, yet Meralco and Gencos did nothing but wait for the billing period and impose their new and adjusted rates,” lamented Fortaleza.
The group, which joined the Freedom from Debt Coalition and Nagkaisa in a picket held at the ERC this morning, added that the crisis is made worse when the government, particularly the Department of Energy (DoE) and the Energy Regulatory Commission (ERC), “stood idle in the face of the surging tsunami of price hikes in the electricity market.”  The government should have disallowed other power plants to shutdown simultaneously with Malampaya to ensure stability of supply in the Luzon grid.
Fortaleza explained that replacement power is a global template for every power supply contract since outages, both regular and forced, is routine in the power system. In many PSA’s the obligation to find replacement power or plan for alternative set up belongs to Gencos since they have contracts to comply in ensuring reliable supply of power to their customers.
Unfortunately, said Fortaleza, most of ERC-approved PSAs assigned replacement power to Meralco and the Wholesale Electricity Spot Market (WESM), where spot prices which as of yesterday range from P17/kWh to P52/kWh.
Fortaleza added that Gencos have options to avoid the instability and he cited the case of Sta. Rita and San Lorenzo.  Based on First Gen’s submission to the Philippine Stocks Exchange (PSE) on March 20, 2012, it explained that,“Although the Sta. Rita plant is intended to operate on natural gas, if delivery of natural gas is delayed or interrupted for any reason, the plant has the ability to run on liquid fuel for as long as necessary without adverse impact to its operation or revenues.” The same business model goes with San Lorenzo.
Now did Gencos, Meralco, and the government considered this option?
“No, they just did nothing,” concluded Fortaleza.
Posted by Juan Manggagawa at 11:21:00 AM