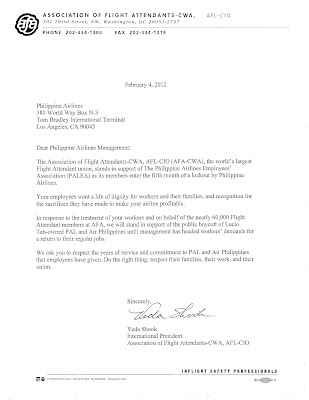 The Philippine Airlines Employees Association (PALEA) got the support of the world’s biggest flight attendants union, the Association of Flight Attendants-CWA, in its long-standing dispute with Philippine Airlines (PAL). The US-based AFA-CWA, which represents some 60,000 flight attendants at 23 airlines, submitted a letter of concern to PAL’s office at the Los Angeles International Airport last February 6.

“We are honored to receive the support of our sister and brother flight attendants from America. Their voice of support adds to the growing chorus of solidarity for PALEA’s fight against outsourcing and union-busting which is a common concern with workers everywhere,” declared Gerry Rivera, PALEA president.

In its letter to PAL, AFA International President Veda Shook said that “Your employees want a life of dignity for workers and their families, and recognition for the sacrifices they have made to make your airline profitable… We will stand in support of the public boycott of Lucio Tan-owned PAL and Air Philippines until management has heeded workers’ demands for a return to their regular jobs.”
AFA-CWA’s solidarity action for PALEA coincided with the Occufly protest staged at LAX by scores of flight attendants and union supporters. The Occufly action was in opposition to corporate greed and union busting by US airlines. The Occufly protesters lambasted the restriction on collective bargaining rights contained in the Federal Aviation Administration reauthorization bill pending in the US Congress.

“This controversial labor provision is nothing less than an attack by the 1% against the 99%. We saw it in Wisconsin and Ohio, now we see it for airline and rail workers who are simply seeking the benefits of collective bargaining or fighting to hang on to collective bargaining rights,” Shook explained of Occufly.

US-based unions and Filipino-American groups are spearheading boycott campaigns in the West Coast cities of San Francisco, Los Angeles, Las Vegas and Vancouver where PAL has its most profitable flights. Rivera met with the top union officials of the AFA-CWA and the AFL-CIO last January 24 in Washington DC to solicit support for its fight against contractualization and the boycott campaign.

The meetings with American union leaders were on the side of Rivera’s testimony on the suppression of labor rights by the Philippine government. Rivera faced-off with government officials led by Labor Secretary Rosalinda Baldoz at the hearing held by the US Trade Representative (USTR). At stake at the hearing were trade benefits accorded by the United States government to countries which it deems respects core labor rights and standards.
Posted by Juan Manggagawa at 9:37:00 PM