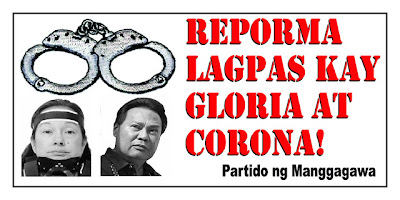 The PALEA rally coincided with the press conference this morning of the “Ang Tipo Kong Chief Justice Movement” in . In the press conference, PALEA joined the League of Cities of the and other groups in calling for people’s participation in the impeachment trial as stakeholders and not just spectators.

“We appeal to our fellow workers to raise their voices and vote with their feet as to what standards should a Chief Justice be held to. We do not deserve a Chief Justice who can be bought by the second-richest Filipino. We cannot have a Supreme Court that will recall a ruling in favor of 1,800 flight attendants due to a mere letter from Philippine Airlines (PAL) lawyer Estelito Mendoza,” explained Gerry Rivera, PALEA president.

He added that “Workers want a pro-labor Chief Justice who will make real the dictum that those who have less in life shall have more in law. But a Chief Justice is only one person who can do so much. Thus we further demand fundamental reforms in our society.”

Rivera enumerated a sample of the fundamental reforms that PALEA is seeking. First, the prosecution not just of a corrupt Chief Justice but the purging of labor dealers in the DOLE and NLRC. The imprisonment not just of an illegitimate president but the punishment of killers of labor leaders.

Second, a shift in change in the government’s labor policy so that regular jobs are protected, contractualization is stopped, wages are not frozen, and the freedoms to organize and bargain are guaranteed.

And finally, a reversal of the neoliberal economic model that has led to the collapse of domestic industry and agriculture. Instead of labor exported abroad, jobs must be generated in the country through national industrialization, land reform and agricultural modernization.

Meanwhile PALEA continues to garner international support as the union Association of Flight Attendants-CWA, the biggest flight attendants group in the world, sent a letter of concern to the PAL office at the international airport (LAX). AFA-CWA held an “Occufly” protest at LAX to slam corporate greed by airline companies.
Posted by Juan Manggagawa at 2:44:00 AM