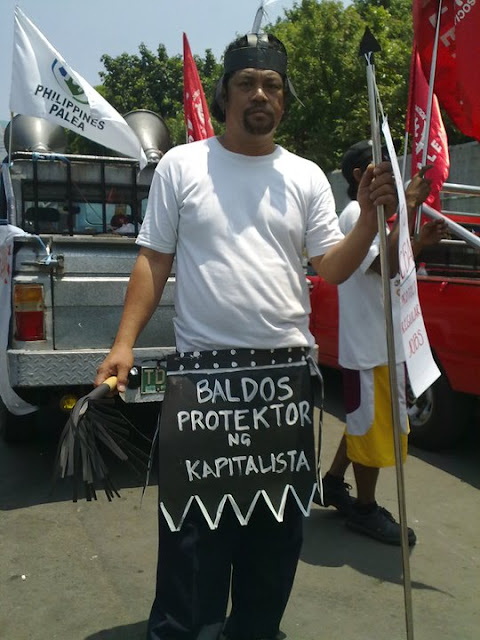 With Labor Day a few days away, the Philippine Airlines Employees’ Association (PALEA) asked President Benigno Aquino to make a policy statement on the Philippine Airlines (PAL) labor row as he had done with the reproductive health issue. PALEA issued the challenge as scores of its members joined an anti-contractualization rally at Mendiola today led by the Alliance of Progressive Labor.

“We want to hear PNoy declare forcefully his policy on labor contractualization as he did on reproductive health. We know that it was Executive Secretary Paquito Ochoa who penned the Office of the President ruling so now we want to learn PNoy’s own thoughts on the dispute given the motion for reconsideration we filed,” stated Gerry Rivera, PALEA president and vice chair of Partido ng Manggagawa (PM).

Rivera slammed the “non-wage benefits” and “job fairs” announced by Labor Sec. Rosalinda Baldoz as government’s gift to workers on May 1. He argued that “These are mere crumbs thrown to workers. Non-cash benefits from Philhealth and Pag-ibig, and discounts on basic goods should complement not replace a substantial across-the-board wage hike in order that the minimum wage can approximate the living wage.”

On April 27, hundreds of PALEA members will picket the National Labor Relations Commission on the occasion of the first hearing on the labor dispute. The day also marks the first anniversary of the termination notices sent by Philippine Airlines management to some 2,600 workers. Also on April 29, PALEA will lead a workers caravan that will go around the major industrial estates and economic zones in . On Labor Day thousands of workers are expected to participate in the protest.
Posted by Juan Manggagawa at 9:36:00 AM