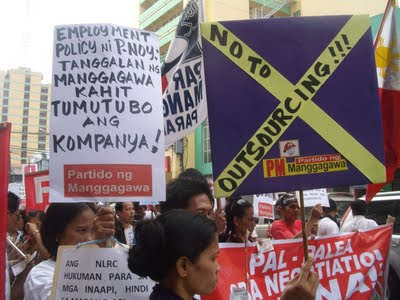 The labor group Partido ng Manggagawa (PM) estimates that the cost of living for a family of six in Metro Manila has breached PhP 1,000 a day as of March this year. PM based its estimate on its own cost of living study last year and the inflation rate over the past year. Thus the group criticized the declaration of Malacanang and the Labor Department that no wage hike is forthcoming on Labor Day.

“There will be no good news for the workers on May 1, just a consuelo de bobo. Non-wage benefits should complement not supplant a wage hike. But even if NCR wage board later grants the PhP 75 petition, it will not be enough to bridge the yawning gap between the minimum wage and the cost of living,” declared Renato Magtubo, PM national chair.

Magtubo also slammed employers for threatening layoffs and closures in the response to the demand for a wage hike. “This is just the usual capitalist black propaganda and blackmail. Employers will not go bankrupt with a wage hike but they will lose some of their profit,” he explained.

Tomorrow, PM together with the Phillipine Airlines Employees’ Association (PALEA) will lead a “Workers Caravan for Regular Jobs and Living Wage” that will go around the economic zones of Cavite. The workers caravan is a buildup to the nationwide May 1 protests. On Labor Day, PM together with PALEA will assemble at 9:00 am at in then proceed to Mendiola for a labor unity rally at Mendiola and mass to be officiated by Manila Auxiliary Bishop Broderick Pabillo. PM will also lead Labor Day protests in , , , , , and .

“The gap between the PhP 404 minimum wage in the NCR and the cost of living is PhP 606 or 150% of the ordinary wage. Even if two members work—which is the buy one, take one policy of the government—then their combined income will not be enough to feed the entire family,” stated Magtubo.

He added that “The National Wages and Productivity Council's (NWPC) cost of living estimate of PhP 917 in September 2008 has to be updated in the light of this study and in the face of continuing inflation. We wonder if the NWPC stopped releasing cost of living estimates because it unwittingly exposes the cheap labor policy of the government.”

PM’s cost of living study did not provide for savings and social security which in the government’s basket of goods and services constitutes 10% of the cost of living. Furthermore, PM's study did not include items such as leisure and recreation, and the family budget for health excluded medical expenses. Magtubo said that “If we include such items, and we must in a more accurate survey, then the cost of living will even be bigger.”

He also argued that “Since we should not impose the burden of household chores and child rearing to the female parent, then the basket of goods should provide for a house-help. That is not anymore a luxury especially in the light of the insistence of the state that both parents must work instead of having just a single breadwinner.”
Posted by Juan Manggagawa at 9:08:00 AM