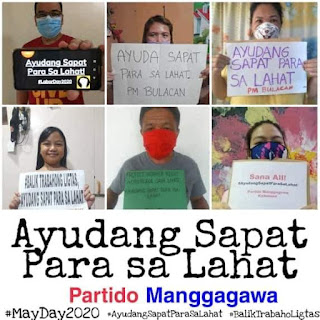 As locked down workers in the Philippines and the world celebrated May 1 in online actions, the labor group Partido Manggagawa (PM) slammed Labor Secretary Silvestre Bello’s push for a “Balik Probinsya” scheme.

“The ‘balik probinsya’ plan of Sec. Bello and the ‘balik trabaho’ proposal of Presidential Adviser Joey Concepcion are both hare-brained pro-capitalist schemes. Labor was not consulted in Bello’s rehash of Bong Go’s plan while Concepcion’s GoNegosyo proposal will endanger workers’ lives. Workers will be sent to the provinces where wages are dirt cheap and will be sent back to work since they are allegedly immune so capitalists can earn bigger profits immediately,” stated Rene Magtubo, PM national chair.

Both proposals are in direct contradiction to the demands being put forward by organized labor in today’s online protest. PM and the labor coalition Nagkaisa are asking workers to make selfies while holding placards with demands and to post it in social media accounts using the hashtags #AyudangSapatParaSalahat, #BalikTrabahongLigtas, #MakataongTugonHindiMilitarisasyon and #MayDay2020.

“A proper response to the covid pandemic should put the needs of the workers and poor first not the interests of capitalists in front and center,” Magtubo averred.

The group is also alarmed at the rise in the number of cases involving cruel treatment by security forces against violators of quarantine protocols and warns against a new normal of impunity. PM cited the police dispersal of a workers’ picketline in Cavite during Black Friday night. Dasmarinas police who refused to give their names threatened two strikers—at the Sejung Apparel Inc. factory in the First Cavite Industrial Estate—with arrest for allegedly violating the quarantine rules.

“Labor rights are not suspended during the ECQ and this incident breaks all the rules of engagement, especially the guidelines on the conduct of security personnel during labor disputes,” Magtubo insisted.

He added that “Workers hold no nostalgia for the old normal of neoliberal capitalism characterized by insecure work, cheap wages, permanent joblessness, privatized services and lack of protection. But we will fight any plot by capitalists and the government to shape a new normal where workers are in worse conditions than before.”

“Instead the working class imagine the new normal as a system where workers are valued for their wealth-creating labor and the people enjoy by right the things necessary for a decent life—full employment, a living wage, universal health care, quality education, social protection and a clean environment, a voice in their workplaces and society as a whole, among others,” Magtubo concluded.