DOLE asked: Take PAL’s assertions with a grain of salt 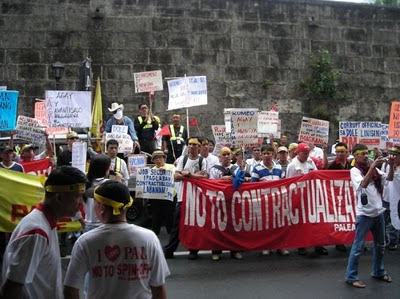 The labor group Partido Manggagawa (PM) asked the Department of Labor and Employment (DOLE) to be more critical of the statements of Philippine Airlines (PAL) management regarding the mass layoff of 300 regular employees. This was the group’s reaction to the pronouncement of DOLE Assistant Secretary Benjo Benavidez that there is nothing illegal in the latest round of separation at the flag carrier.

“The DOLE is cognizant of the outsourcing dispute at PAL and that historically the company has laid off regular employees so that the work is subcontracted to endo workers in service providers. Thus DOLE must be more critical of the basis and purpose of the recent retrenchment of 300 employees,” asserted Rene Magtubo, PM national chair.

Alnem Pretencio of the Philippine Airlines Employees Association (PALEA) also called on DOLE to immediately decide pending labor cases of the flag carrier. He explained that “Given this most recent mass layoff, it is incumbent upon the Office of the Labor Secretary to decide on two unresolved cases. One is the illegal dismissal in 2015 of 117 workers in the provincial airports. And second, the results of the SAVE inspection of PAL which found that the flag carrier illegally practiced labor-only contracting in the use of contract workers in the service providers. The cases have languished at the DOLE for the past several years.”

Magtubo averred that “The findings of the SAVE inspection shows rampant contractualization at PAL. This despite the DOLE’s legal imprimatur to the 2011 outsourcing of the airport services, catering and reservations departments that led to the loss of jobs of 2,600 regular workers. DOLE should not repeat the same mistake in prematurely declaring that the latest mass layoff is above board and legal.”

“In fact, on its face, there is an obvious disparity in numbers. In his declaration that the layoff is legal, ASec Benavidez cites that 182 employees have voluntarily accepted separation. But PAL states that 300 are affected and that workers will be retrenched aside from voluntarily separated. This begs the question, what is the status of the rest of the 300 workers to be dismissed?,” inquired Magtubo.