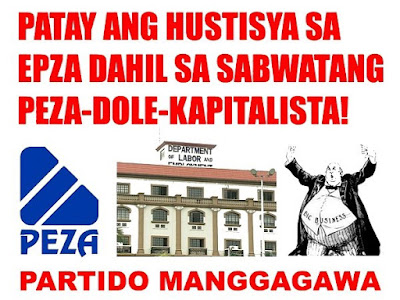 Members of the group Partido Manggagawa (PM) picketed this morning the main office of the Department of Labor and Employment (DOLE) to demand that the National Tripartite Industrial Peace Council (NTIPC) be convened to investigate the killing of a union organizer in Cavite. The mass action coincides with the 40th day since the brutal shooting of Dennis Sequeña, vice chair of the PM-Cavite chapter and veteran union organizer.

“We condemn the glaring inaction and chilling silence of the DOLE on the killing of our colleague Dennis. Today marks 40 days since his murder, and the relevant government agencies have so far failed to make any headway in the investigation of the case,” stated Rene Magtubo, PM national chair.

The NTIPC, sitting as the National Tripartite Monitoring Body (NTMB), is tasked to investigate complaints of labor-related extra-judicial killings. The NTMB was formed in response to the recommendations of a high level mission by the International Labor Organization in 2009.

The mass action today over the murder of Sequeña comes in the wake of the Philippines being named among the ten worse countries for workers. The International Trade Union Confederation (ITUC), the global body of organized labor, has once again listed the country for systematic violations of labor rights.

Sequeña was killed in broad daylight by a gunman in the middle of a meeting with ecozone workers last June 2. Local and international labor groups, including the labor coalition Nagkaisa and the ITUC, condemned the murder, called on the DOLE to stop the killings of unionists and investigate these cases.

“It is sad and frustrating to note that such basic acts of workers self-organization, protected no less by our Constitution and several international conventions and treaties, come at the price of the lives of countless labor organizers and rights defenders. Dennis’ murder and the appalling state of worker’s rights in ecozones simply confirm the report by the ITUC that the Philippines is among the ten most dangerous countries for unionists,” Magtubo explained.

PM also demanded that the DOLE enforce laws guaranteeing the freedom of association in ecozones in light of rampant management interference and intimidation against workers exercising their constitutional and human rights. Sequeña was actively assisting three unions at the time of his killing. This month several unions in the ecozones of Cavite are due to undergo certification elections but organizers are alleging that workers are “challenged by adversity and harassment by management.”