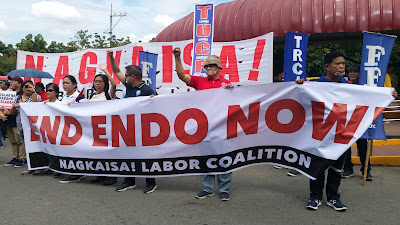 “Should President Duterte surrender to the demand to veto the bill, then he reveals where he stands on the class war between the workers and capitalists on contractualization. It has been three years since Duterte promised to abolish contractualization but millions of workers continue to suffer from this abusive scheme. A presidential veto will just be another betrayal of his promise to workers,” argued Magtubo.

Workers are set to continue pushing for a strong security of tenure law with the opening of Congress on July 22. Various labor groups are in talks for a coordinated march on the occasion of the SONA.

Magtubo stated that “Contrary to the wild claim of employers that the security of tenure bill is superfluous because endo has already been ended with DO 173 and EO 51, numerous loopholes allow the proliferation of contractual workers everywhere. The security of tenure bill will not end endo and will not stop contractualization because it is a weak version of the proposed law.”

“The differences between the Senate and House drafts of the bill should have been ironed out by a bicameral conference committee but magically the weak version was adopted in toto by Congress. The culprit for watering down the security of tenure bill was lobby by the Department of Finance and maneuvering by pro-capitalist senators,” explained Magtubo.