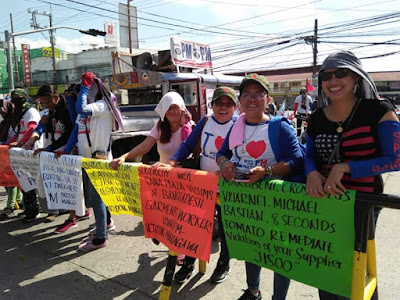 With just a week to go before Labor Day, the partylist group Partido Manggagawa (PM) called on Labor Secretary Silvestre Bello to investigate complaints of union busting at the biggest export zone in the country. Workers of garments factories in the giant Cavite Economic Zone are complaining of union busting by their management.

“We ask Secretary Bello to act with dispatch as workers’ right to choose to be represented is being curtailed by foreign investors. With these cases of union busting, freedom of association will be among the highlights of workers’ commemoration of Labor Day on May 1,” stated Rene Magtubo, PM national chair.

The workers of Korean-owned Jisoo Garments Manufacturing Corp. are alleging that management is maneuvering to bust the union. Jisoo separated almost all of its regular work force last March ahead of a possible certification elections in April. Last April 14, some 100 workers in a motorcade of 50 motorcycles held a mass action at the main gate of the Cavite Economic Zone in support of the Jisoo union.

Magtubo reminded Sec. Bello that “Last May 2018, the Department of Labor and Employment convened a dialogue between labor groups and the Philippine Economic Zone Authority to address complaints of violations of the right to unionize and labor standards in the major ecozones like in Cavite and Mactan Cebu. A technical working group was formed to resolve the allegations of union busting and other workplace grievances. Thus we ask Sec. Bello to put its commitment into action.”

“To pre-empt the certification election and bust the union, last March Jisoo management offered to separate its regular work force. The separation package was supposed to be voluntary but instead workers were called for one-on-one meetings in management offices and cajoled into accepting the offer. Almost all of the 350 regular workers were terminated and only a handful of union officers remained who resisted the offer. Recently, the union president was denied overtime as a way to harass the remaining holdouts,” Magtubo explained.

Meanwhile another union busting complaint, by workers in Daegyoung Apparel Inc., also Korean-owned, was settled last Monday during a hearing by the DOLE-National Conciliation and Mediation Board with management pledging not to interfere in their employees’ right to unionize. The Daegyoung union filed for preventive mediation because workers were being called by management to meetings and asked to sign statements that they will not join a union.

Magtubo declared that “We commend the management of Daegyoung for committing to respect freedom of association and will hold them to that promise. As far as we know, things have changed in the factory since the settlement of the union busting complaint.”

A union busting complaint filed by the Jisso labor union is presently pending. Jisoo supplies to well-known and global garments brands such as Marubeni of Japan, Cross Plus of Japan, Vuarnet of France, Michael Bastian of the US, 8Seconds of Korea and Tomato.

Photos of the riders protest at the Cavite ecozone can be accessed at
https://www.facebook.com/partidomanggagawa/posts/10157074669864323?__xts__[0]=68.ARCNe8Xq2DOLfIoDmiOvTmmdL-gw9m6y4kEKWiSzaD0_wJnX3WzPLxABqjj5qRM7ZpljywAYDZDVioixOOblkpcSAvz0tgFoIKM4BTcKao1_b7UxfGK-HRMbsegXNlpcq0CM-vpThuUaCHPe1sDu6WaBYpUyMUW1zEA5zLzKSnLGs8Fb3r8urgcjk5Z46ES9MZxYLd64wmU5SeZUpgcuDWTQwB61Qahdk9_JDKRyqROGAllu3qO6-604MCgtkyPYV-NZhwzmjW2qpMeELJh0m5T7apHMw_NYVnBp4SvDojKegkTF4AZTEDl2zILQuw3EclpbSw8A2FjmgL1k8mcn&__tn__=-R