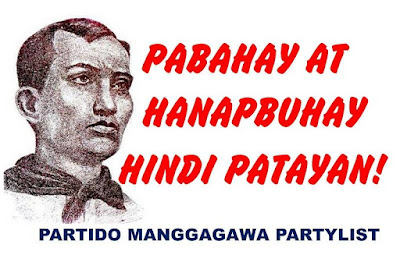 The abolition of contractualization and the regional wage boards were the top demands of the labor partylist Partido Manggagawa (PM) in nationwide rallies to commemorate Bonifacio Day. Some one thousand workers, urban poor, community youth and college students joined the mobilization in Manila. Coordinated rallies were also held today in Cebu, Bacolod and Davao.

“If Gat Andres Bonifacio were alive today, he would no doubt be leading another revolution to defend workers against the onslaught of endo by greedy capitalists, the cheapening of wages by the regional wage boards and the loss of our sovereignty to both the US and China. To symbolize the fight, instead of ripping Spanish cedulas, Bonifacio would be tearing up the endo contracts and the wage orders,” stated Rene Magtubo, PM national chair.

PM together with allied groups Kilos Maralita, Umalab Ka, National Federation of Labor, Aguila (Association of General Unions, Institutions and Labor Associations) and PUP student group SPEAK assembled its contingents at Blumentritt, Espana early this morning. By 9:00 am, they moved a short distance to Welcome Rotonda to merge with other groups under the labor coalition Nagkaisa. Around 10:00 am, the several-thousand strong rally marched down Espana towards Morayta. There Nagkaisa held a program to issue its “workers’ challenge” to candidates in the coming elections.

PM is calling on Congress to pass the pending Security of Tenure bill that provides for strict regulation against contractualization and aims to make regular jobs the norm in employment relations. Likewise, the group is demanding for a reform of the wage setting mechanism and a return to a national minimum wage instead of the present regional wages.

Magtubo asserted that “Duterte promised to abolish endo the moment he becomes president. In a dialogue with labor groups, he also said that ‘provincial rates’ must be eliminated. Three years into his term, these remain broken promises. Instead of focusing on people’s concerns like wages, jobs and inflation, his administration aims to capture the Senate so it can railroad the shift to federalism through charter change even as it continues the bloody war on drugs and prepares to start a new, bloodier war against communist rebels.”

PM is participating in the coming elections for the partylist. The demand to end endo and abolish the regional wage boards are part of its platform of “Apat na Dapat.” The other demands include provision of decent housing for the poor, subsidy for sustainable agriculture by farmers, and social services for women and youth.