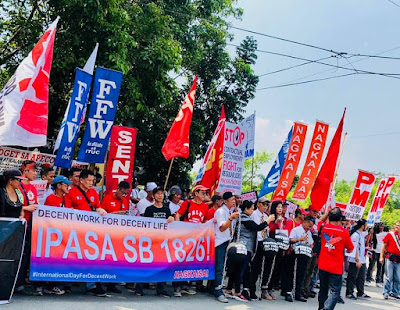 Subject to on going plenary debates in the Senate is SB 1826 which aims to prohibit illegal and unjust forms of contractualization and tighten the noose further against valid or allowable contracting. The bill was certified as an urgent measure by the President.

“We demand that SB 1826 is put into final consideration before the Senate takes a break this week and legislators get swallowed by the October electoral fest,” said Nagkaisa in a statement.

Nagkaisa spokesman and Partido Manggagawa chairperson Renato Magtubo said the bill can be put into final vote now by the Senate as opposition to it, if there’s any, stand on weak and overly-discussed arguments during the last two decades.

The SOT Bill tightens regulation by changing the definition of prohibited “labor-only” contracting by prohibiting all instances where the contractor merely places workers to another entity. At the same time, it continues to recognize valid contracting arrangements but places reasonable safeguards to prevent abuse of workers.

The senate action of Nagkaisa is also in celebration for the bicam’s approval of the proposed Expanded Maternity Leave bill.  But aside from SOT, the group is also raising several other issues such as low wages and runaway inflation, trade union repression, inadequate social security benefits, and weak representation at many levels of government, among others, which prevent Filipino workers from enjoying decent work.

October 7 is marked yearly as World Day for Decent Work by the international trade union movement amid rising inequality across the globe despite economic growth.  According to published studies, the world’s richest 1% owns more wealth than the rest of the planet. The same is true in the Philippines with the richest 50 families in command of more than a quarter of the economy while the rest cope with bare subsistence under the regime of low wages and irregular income due to chronic unemployment and underemployment problems.

Furthermore, the group deplore in strongest possible term the way President Duterte, in particular, demonizes strikes and other union activities as if exercising these guaranteed constitutional rights is no longer existent in his law or has become illegitimate acts before his eyes.

“It is absolutely detestable to see the President and the armed forces paint unions as destabilizers and demonize strikes as if workers were exercising this right in pursuit of criminal objectives. Trade union rights far exceed the right of one person, however powerful he is, to deny the oppressed class from exercising it. Globally these rights are under attack from owners of capital and the least that we expect from the President is to be on the offensive side of capital,” concluded Magtubo. ###