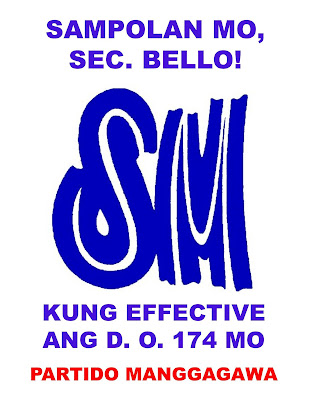 Is the new DOLE Order effective or defective in stopping the epidemic of contractualization?  This question was raised by Partido Manggagawa (PM) in a picket-rally held at the Manila branch of SM Monday as Department Order No. 174 is expected to take effect beginning this week.

It can be recalled that the SM group, through its investor relations chief, Cora Guidote, did not seem to worry about the new rules saying it has no impact to the group. “Nothing has changed as far as SM is concerned. No impact to the group,” said Guidote in recent media interview.
PM is one of the labor groups under the Nagkaisa coalition which rejected D.O. 174 when it was issued on March 16, 2017 as it allows agency hiring to continue despite opposition from the labor movement and the pledge made by the President.

“SM Manila is just a stone's throw away from DOLE so its officials, therefore, need not go far other places to prove the usefulness of D.O 174.  The regularization of SM’s entire workforce is a big thing to watch in our continuing fight against contractualization,” said PM Secretary General, Judy Ann Miranda.

Labor groups were making the SM group and other giant companies like PAL the showcase in its continuing campaign against contractualization.  According to estimates, the SM group has at least 90,000 workforce nationwide and it is public knowledge that much of those working in malls as sales ladies, cahiers and dicers work as contractuals. As of late it has only regularized some 4,000 according to DOLE.

According to Miranda, Secretary Bello in countless interviews had always referred to sales ladies as workers who perform ‘necessary and desirable’ jobs that are not allowed to be contracted under the rules. But SM justifies its big number of contractuals as seasonal workers which is allowed under the Labor Code.

Agency hires abound in the service sector but this practice is more pronounced in big companies like malls, hotels and restaurants rather than in small scale enterprises.  About 30% of total workforce in establishments with 20 workers and above is considered ‘non-regular’, according to the latest survey conducted by the Philippine Statistics Authority.  An independent study by Center for Women’s Resources (CWR) showed 80-85% of workers in 11 branches of SM in NCR are contractuals.

“SM should not be allowed to continue hiding their contractual workers under the wrap of different seasons. That is fraudulent. And if D.O. 174 becomes benign to SM, PAL and other giant companies, then the new policy will be a complete failure,” concluded Miranda.

PM also points to export zones as notorious hubs of contractualization where DOLE has been a failure for decades.