Rallyists ask DOLE to act on killings of unionists, endo at PAL 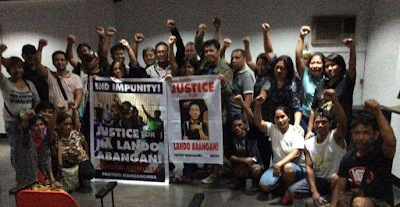 In a rally today at the main office of the Department of Labor and Employment (DOLE), the labor groups Partido Manggagawa (PM) and Philippine Airlines Employees Association (PALEA) asked the government to act with dispatch on the wave of killings and abductions of unionists, and the pending endo dispute at Philippine Airlines.

The rallyists demanded the intervention by the DOLE on the endo dispute at Philippine Airlines (PAL) and the enforcement of a settlement agreement that provides for the reinstatement of some 600 PALEA members. Yesterday was the fifth anniversary of the controversial outsourcing program of PAL that resulted in the mass layoff of more than 2,000 regular employees and their transfer as contractual workers in service providers.

“Similar to the task force on media killings formed by the current administration, such a body should be probe the spate of killings and abductions of labor unionists. It is an urgent concern as in this single bloody month of September, two labor leaders were assassinated, six farmers killed and a union officer abducted,” asserted Wilson Fortaleza, spokesperson for PM.

PALEA is calling on the DOLE to administer the implementation by PAL of a settlement agreement forged in 2013 and re-employ some 600 workers terminated in 2011. In September 2011, some 2,600 PAL regular workers were terminated and outsourced to become agency workers. After a two-year fight, PALEA and PAL forged a deal to settle the labor dispute yet some 600 retrenched members have not been re-employed as provided for in the agreement.

Fortaleza added that “The DOLE has a responsibility to stop the culture of impunity that has resulted to the killing and abduction of labor unionists. Forming a task force to probe the attacks on workers and farmers is just a first step. As we have feared, the extra-judicial killings in the wake of the war on drugs has now spilled over into the labor movement. Truly human rights and labor rights are indivisible.”

Last week, Edilberto Miralles, former union president, was gunned down in front of the National Labor Relations Commission. On September 17, Orlando Abangan, a PM leader and organizer in Cebu, was ambushed on his way home. Last Sunday Patricio Tago Jr., a union vice president, was abducted in Tarlac and then imprisoned for allegedly being a drug pusher. Labor groups have called the drug charges as trumped-up.

Besides the latest fatal shooting of a farmer in Palawan, earlier this month, four farmers were shot dead in Nueva Ecija and then a farmer leader killed in Isabela.