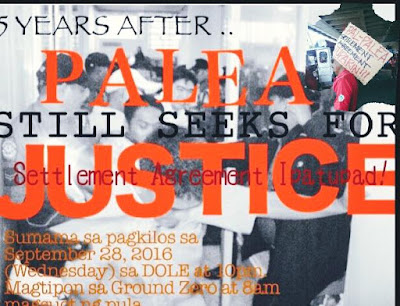 WHAT: In the picket, PALEA will challenge the DOLE on stopping endo, and demand the reinstatement of regular workers at Philippine Airlines outsourced five years ago

DETAILS: As part of the ongoing campaign against contractualization and to challenge the Labor Department on its end endo promise, the union Philippine Airlines Employees’ Association (PALEA) will picket the DOLE main office. The rally is timed for the fifth anniversary of the massive outsourcing that displaced more than 2,000 regular workers at Philippine Airlines and replaced them by contractual workers in service providers.

The renewed actions are spurred on by the promise of incoming President Rodrigo Duterte to end endo. Last year, just before Duterte run for president, he met leaders of PALEA in Davao and expressed his opposition to contractualization. PALEA and the militant group Partido Manggagawa are now asking the president elect to make good on his promise to stop contractualization at PAL and other companies.

PALEA is calling on PAL to implement the settlement agreement forged in 2013 and re-employ some 600 workers terminated in 2011. In September 2011, some 2,600 PAL regular workers were terminated and outsourced to become agency workers. After a two-year fight, PALEA and PAL forged a deal to settle the labor dispute of 2011 yet some 600 retrenched members have not been re-employed as provided for in the agreement.