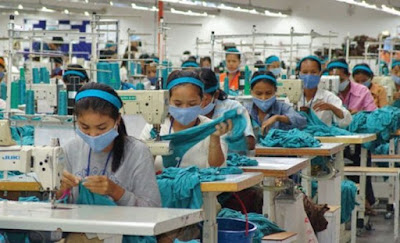 Kudos to the workers of garments factory Faremo International Inc. in the Cavite EPZA for winning their remaining demands and concluding a collective bargaining agreement (CBA) after days of protests and the threat of a strike.

"What we failed to achieve in more than three months of bargaining at the table, we won with the help of three days of mass protests by union members who wore red ribbons at work to express their fervent demand for a decent CBA and were determined to go on strike if necessary," explained Jessel Autida, president of the Faremo labor union.

The Faremo workers won their demand for retirement pay, paid leaves and other monetary benefits. These issues were previously unresolved and caused the deadlock in the CBA negotiations.

Last Monday the Faremo union filed a notice of strike due to CBA deadlock and workers also started tying red ribbons in their shirts or around their heads. The ribbon protest continued until last Wednesday when the DOLE/NCMB called for a factory level mediation hearing to resolve the strike threat.

While the negotiations proceeded, hundreds of workers who clocked out of work stayed just outside the factory gate to show support for the union panel. The conclusion of the CBA negotiations was met with joy by the Faremo workers. The notice of strike has been withdrawn by the union while the draft CBA will next be submitted for formal ratification by the union members.

Faremo is a subsidiary of the Korean multinational Hansoll and produces for global garments brands Gap, JC Penney and Kohl's. Aside from the Philippines, Hansoll has factories in Indonesia, Cambodia, Vietnam, Guatemala and Nicaragua.