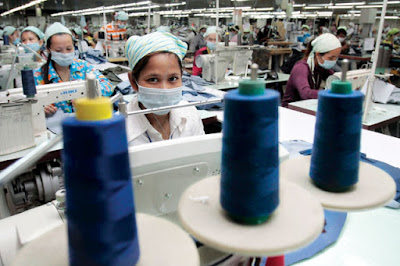 Workers of the biggest garments factory at the country’s largest export zone are preparing to go on strike to break a deadlock in collective bargaining negotiations. The union of workers at Faremo International Inc. in the Cavite ecozone filed a notice of strike yesterday after bargaining talks remained inconclusive last Friday.

“Workers are asking for just a little more than 5% of the net profit on a per capita basis of Faremo’s mother company yet the company refuses to budge on our just demands. The union has patiently negotiated for the last four months but management has been intransigent. It has even showed bad faith in bargaining for withdrawing a previously agreed upon offer of paid leaves,” explained Jessel Autida, union president of the Faremo International Inc. Workers Association.

Provisions on retirement pay, paid leaves and other monetary benefits remain pending at the bargaining table. On Wednesday, the Department of Labor and Employment is calling a mediation hearing in a bid to resolve the bargaining dispute and avert a strike.

Despite years on the job, almost all workers at Faremo are paid just the regional minimum wage of P315 plus P25.50 in allowances. A handful of so-called pioneer workers are paid wages P1 higher than the minimum. Workplace grievances like low pay impelled the formation of a union at Faremo last year.

“Management keeps on saying that Faremo was in the red for the past several years and only showed a small profit last year. The union believes this is simply due to the magic of transfer pricing. Faremo sells its products at low prices to its mother company Hansoll and thus the profit is reflected in the latter not the former,” Autida insisted.

In its website, Hansoll proclaims that it has revenues of USD 1.23 billion and a target net profit of 5% on sales by year 2017.

There are more than a thousand workers at Faremo, some 800 of whom are regular and represented by the union. Faremo is a subsidiary of the Korean multinational Hansoll and exports to the US and Europe for global garments brands.

Yesterday Faremo workers started wearing red ribbons to symbolize their demand for a decent collective bargaining agreement. More mass actions are planned to highlight the plight of workers at Faremo.