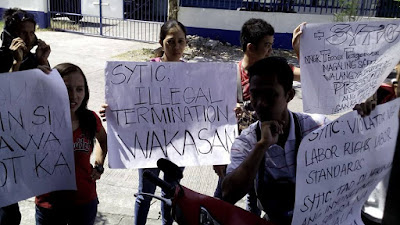 At Korean-owned factory in Cavite EPZA:
Daily protests as countdown to strike begins

Wednesday-Friday (April 6-8): Workers to hold daily protests from 1:00 p.m. onwards at Seung Yeun Technology Industries Corp., Cavite ecozone, Rosario, Cavite
Friday (April 8): Mediation meeting between management and union at NCMB Imus (MYP GBY Building, Bayan Luma 7, Aguinaldo Highway, Cavite)
After a majority of union members authorized the holding of a work stoppage in a strike vote last Saturday, workers of Seung Yeun Technology Industries Corp. (SYTIC) will hold daily protests this week as buildup. The law provides that the union should wait for seven days after the holding of a strike vote before actually launching a work stoppage.
The SYTIC workers union had filed a notice of strike due to union busting. Twenty SYTIC workers, majority of whom are elected union officers and the rest union members, have been retrenched in a blatant attempt at union busting in the country’s biggest export zone, the Cavite ecozone in the town of Rosario.
The workers have recently formed a union in an effort to address workplace problems including violations of labor standards.  Among the most egregious violations are that part of their wages are not paid in cash but in the form of meals, non-payment of overtime due to an illegal compressed workweek schedule and the lack of a company nurse, doctor and hospital bed.

SYTIC is a Korean-owned plastics company that is part of the electronics industry supply chain. SYTIC’s main customers are local subsidiaries of big US multinationals like ON Semiconductor, Analog Devices, Texas Instruments, Maxim Integrated and Cypress.
Posted by Juan Manggagawa at 8:57:00 AM