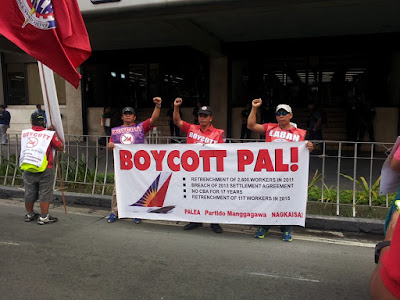 A conciliation meeting yesterday between the management of Philippine Airlines (PAL) and the union Philippine Airlines Employees’ Association (PALEA) ended without any agreement on the issue of the recent mass layoff of 117 employees. The first meeting between PAL and PALEA was called by the National Conciliation and Mediation Board-NCR after the union filed a notice of strike last October 8, allegedly unfair labor practice due to the retrenchment and management interference in the right to unionize. The law gives PALEA 15 days after filing before it can actually hold a strike.

“PAL, through the industrial relations lawyers who attended in behalf of management, was non-committal on the union demand to recall the separation of the 117 employees and their immediate reinstatement. Thus PALEA’s notice of strike stays,” stated Gerry Rivera, PALE president and vice chair of Partido Manggagawa.

Another conciliation meeting is set for Thursday, October 15. PALEA asked that PAL President Jaime Bautista attend the meeting to facilitate resolution of the dispute. As part of its weekly protests, tomorrow PALEA will picket PAL offices around the .

PAL sent termination notices to 117 employees, almost all PALEA members and working in domestic airports around the country last September 2. The notice cited an organizational restructuring which had rendered “several positions in the Company redundant.”

However Rivera argued that “No redundancy exists since the workers retrenched were replaced by agency employees. The new round of layoffs is just another wave of contractualization, changing regular unionized workers with contractual employees who will be paid less in wages and benefits.”

He added that “The mass layoff is not only illegal but immoral. PAL is firing workers though it is wallowing in profits. PAL’s parent company, PAL Holdings, reported a net income of P5.8 billion ($126.20 million) for the first half of 2015, soaring nearly ten-fold from P560 million ($12.18 million) during the same period last year.”

PALEA wrote PAL President Jaime Bautista last September 5 to ask for the recall of the mass layoff. In the same letter, PALEA also repeated its request for the commencement of collective bargaining negotiations, and the resumption of discussions for the implementation of the Settlement Agreement.

No collective bargaining negotiation between PAL and PALEA has happened since 1998 when a 10-year CBA suspension was imposed. After a two-year campaign, PALEA and PAL forged a deal to settle the labor dispute of 2011 yet some 600 retrenched members have not been re-employed as provided for in the agreement.
Posted by Juan Manggagawa at 1:10:00 PM