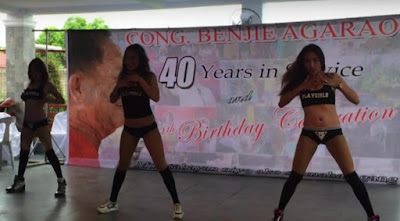 “We challenge MMDA Chair Francis Tolentino and Laguna Rep. Benjie Agarao to issue categorical apologies. Their insincere denials are worthless and lame excuses are even worse. We want to hear Tolentino and Agarao declare that the performance was offensive to women, say they are sorry for it and promise not to have similar acts in their upcoming political events,” averred Erika Isaias, PMK spokesperson for Cavite.

A sexy dance group called Playgirls performed lewd acts in an oath-taking of new Liberal Party members in Laguna presided by presidential candidate Mar Roxas. The performance was allegedly a “surprise gift” from Tolentino to birthday celebrant Agarao. Children and minors were in attendance at the LP event.

“If there is any truth at all to the daang matuwid platform of LP, then such lewd dances have no place in a political gathering. Trapos frequently talk of family values, women’s rights and child welfare. But their use of sexy or lewd performances as entertainment in political meetings exposes such as lip service if not blatant lies,” insisted Isaias, a 23-year old young worker in an ecozone in Cavite.

PMK is composed of out-of-school youth, students and young workers who advocate issues such as education for all, regular jobs, decent wages, affordable housing and community involvement of working class youth.
Posted by Juan Manggagawa at 12:15:00 PM

We must look at such public objectification of women's bodies as abuse and violence against women -- designed to humiliate those who are performing.