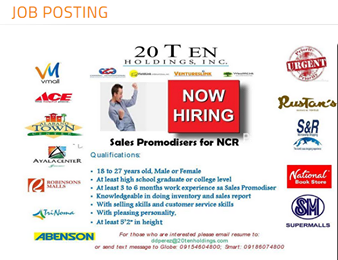 The labor group Partido Manggagawa (PM) welcomed the enactment of an ordinance in outlawing some forms of discrimination in the workplace. Last month San Juan Mayor Guia Gomez signed the ordinance that was unanimously passed by the city council. PM however called for its strict implementation and passage of legislation against other prevalent forms of discrimination.

PM is calling for the passage of similar ordinances in other cities and industrial towns. Also the group is lobbying for the enactment of pending bills against age discrimination in the workplace, such as the one authored by Senator Pia Cayetano. “Also discrimination against LGBT workers is another front in the fight for equality in the world of work,” Miranda reminded.

She added that “It is common knowledge that employers and recruitment agencies blatantly and regularly discriminate against workers in terms of sex, age, looks and marital status. An online search results in examples of these discriminatory practices popping up like so many unwanted ads. Enough is enough. Workers demand respect and equality in the workplace.”

Miranda however noted that “The San Juan ordinance stipulates very light fines thus it may not deter incorrigible employers.”

She said that the Labor Code already bans and imposes fines on discrimination against women workers in the terms and conditions of employment such as wages, benefits and promotion on account of sex. Further discrimination against married and pregnant women workers is also expressly outlawed. “Still, like other labor standards, these rights are violated with impunity by employers,” Miranda argued.

She called on women and LGBT workers to be aware of their rights in the workplace, ensure the implementation of these entitlements and fight for the outlawing of other forms of discrimination.

Miranda insisted that “Women workers in the have won some rights but we still have a lot more to claim. For example, in the Australian state of , aside from the usual prohibition against discrimination based on sex, marital status, pregnancy, disability and religion, workers are protected in all stages of employment against discrimination with regards to physical features, gender identity, sexual orientation, and even personal association with people who have or assumed to have such personal characteristics. A progressive workplace in the should be similar.”
Posted by Juan Manggagawa at 8:07:00 AM