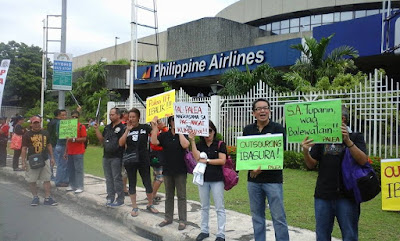 The Philippine Airlines Employees Association (PALEA) today asked the Department of Labor and Employment (DOLE) to act on the mass layoff at Philippine Airlines (PAL) as the union held a picket at its Intramuros main office. More than a week ago PAL announced the retrenchment in November of 117 employees all working at domestic airports all around the country.

“We call the attention of DOLE Secretary Rosalinda Baldoz to the brewing labor dispute over the latest round of retrenchments at PAL. Sec. Baldoz called the Kentex owners immoral for their occupational health and safety negligence but it is also immoral to lay off almost all personnel at domestic airports when PAL is wallowing in profits of P6.45 billion for the first half of the year,” stated Gerry Rivera, PALEA president and vice chair of the militant Partido Manggagawa (PM).

In its stockholders meeting last August, PAL declared that it is expecting to end the year in the black. PALEA recalled that in 2011 PAL argued that it was losing money and thus it was necessary to retrench a third of its total workforce.

Rivera insisted that “DOLE cannot pretend not to see, hear and speak no evil when workers rights and livelihood are assailed with impunity. Article 277 (b) of the Labor Code empowers the Labor Secretary to resolve cases of mass layoff that results in labor disputes. Further she has the authority to assume jurisdiction (AJ) of labor disputes. In fact less than a month ago Sec. Baldoz imposed an AJ to stop workers of power plant KEPCO-Cebu from striking against union busting and refusal to bargain since it will disrupt the APEC events in . Why is it that AJ is always used to stop workers from fighting back and never to bar capitalists from attacking labor rights?”

Since last week PALEA has been holding protests at PAL’s main office at the in and its various offices around the . PALEA has announced that the mass actions are the start of a renewed campaign to oppose contractualization and outsourcing. It will continue on to PALEA’s 69th year anniversary on September 21 and then escalate in November in time for the APEC summit.

Aside from blasting the latest layoffs, the PALEA protesters also called for the opening of collective bargaining negotiations and the full implementation of a settlement agreement that ended the dispute over the last mass retrenchment in 2011. No collective bargaining negotiation between PAL and PALEA has happened since 1998 when a 10-year CBA suspension was imposed. After a two-year fight, PALEA and PAL forged a deal to settle the labor dispute of 2011 yet some 600 retrenched members have not been re-employed as provided for in the agreement.
Posted by Juan Manggagawa at 9:51:00 AM

I was in Gensan last 2 weeks ago and Ive learned that PALE Management arrived in Gensan with the prepared cheques for the regular workers. The workers were just told that they will be separated starting November 9, 2015 this year. They were made to sign a quick claim with initial payment of 100,000. They were offer to be "rehired"by Macro Asia thru the agency and for loader position, they will only pay 7,500 pesos per month!

There were no proper consultation for this process. The workers were asking if they will not sign? PAL Management just replied: then you have to go to manila to process your claim!