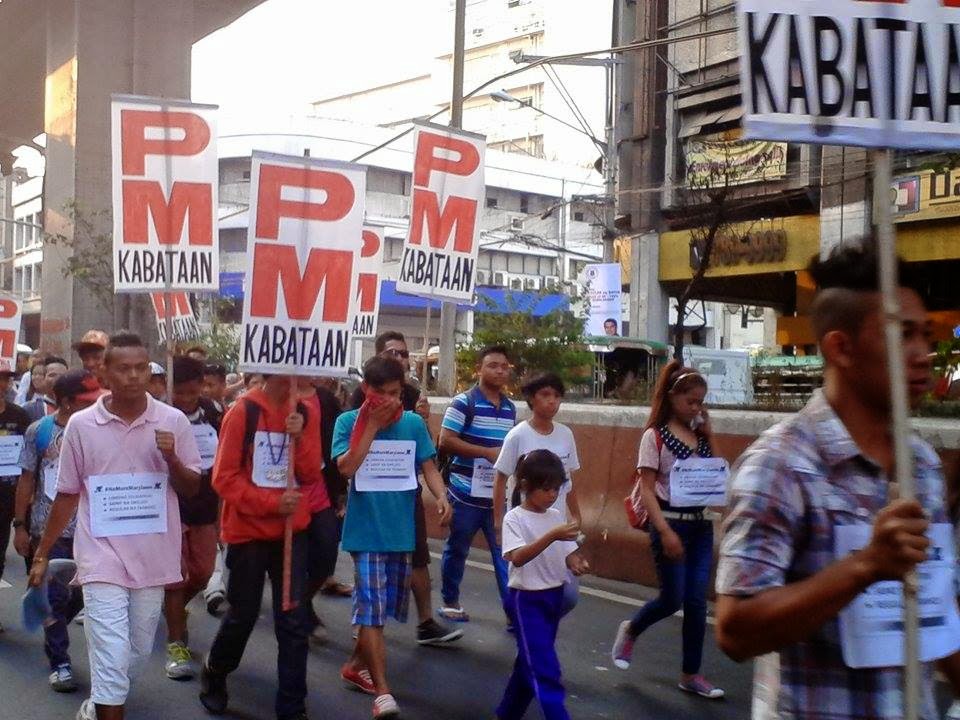 NEWS RELEASE
01 May 2015
A big march to Malacanang with simultaneous actions in other cities nationwide marked today’s celebration of Labor Day as workers protested the government’s failure to address their bottom line issues such as jobs and job security, living wage, trade union rights, and decent working and living conditions.
In , thousands of workers from different federations and labor organization comprising the Nagkaisa! coalition marched from Mabuhay Welcome Rotonda to Mendiola under the theme, “Hustisya sa Manggagawa at Sambayanan.”
The cry for justice, according to Nagkaisa!, is labor’s summation of failed engagement with President Aquino, whom the group insisted, “never stood on the side of labor since the PAL dispute in 2011” despite the rhetoric of ‘tuwid na daan’.
“President Aquino should have learned a valuable lesson from his last minute intervention on Mary Jane’s case. That in order to move a quixotic boulder up the mountaintop, a firm decision and solid determination is needed -- a resolve he never had in addressing labor problems during the last five years in office,” said Partido Manggagawa (PM) chair Renato Magtubo and one of Nagkaisa! convenors.
The group disclosed earlier that none of labor’s bottom line issues such as contractualization, low wages and power rates reduction have been addressed by Malacanang after four years of dialogues.
“During the last five years we didn’t ask President Aquino to produce miracles.  Yet a simple certification of pro-labor measure such as the Security of Tenure bill to regulate contractualization did not even warrant his attention,” said Josua Mata, Secretary General of Sentro ng Nagkakaisang Manggagawa (Sentro), another convenor of Nagkaisa!
Labor justice, he added, needs a powerful execution and not endless dialogue.
Another convenor, Annie Geron of the Public Services Labor Confederation (PSLINK), public sector unions are disappointed that the President was not even aware of the fact that the government bureaucracy itself is implementing a widespread and worst kind of contractualization called ‘job orders’.
However, Nagkaisa! conceded that President Aquino has earned credits for saving the life of Mary Jane Veloso.  But the group said that won’t change the fact that beyond his buzzer beater intervention on Mary Jane’s behalf, many labor issues that translate into social problems like human trafficking and the exodus of Filipinos to foreign lands persist.
“Filipino are hopelessly enmeshed in an unchanging political system serving the affluent elite and betraying the destitute millions. They sense that no one is fighting for them,” said Gerard Seno, Vice President of Trade Union Congress of the Philippines (TUCP)-Nagkaisa!
Bukluran ng Manggagawang Pilipino (BMP) President accused the Aquino administration of perpetuating the old system of elite rule.
“PNoy has resolutely protected controversial allies and lifted no fingers on political dynasties. But never had he shown a grain of disposition for the working class,” said De Guzman.


Other than , labor marches were also held in the cities of Cebu, , and General Santos.
Posted by Juan Manggagawa at 5:34:00 AM