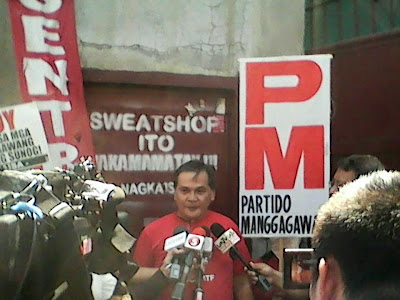 The labor group Partido Manggagawa (PM) today challenged the business sector to speak on the fire at Kentex Manufacturing Corp. that killed at least 72 people, almost all of whom were factory workers and many of whom were women.

“Compared to the prominent role of employers in support of the controversial Bangsamoro Basic Law, they are noticeably absent in the calls for justice and reform in the wake of the tragic Kentex fire. Would Jaime Zobel de Ayala and Manny Pangilinan link up arms with labor leaders to call for jailing the immoral owners of Kentx and the criminalization of workplace safety violations?,” asserted Judy Ann Miranda, PM secretary general.

Yesterday, PM together with labor groups affiliated to the coalition Nagkaisa! trooped to the Kentex factory to hold a site inspection and spray paint the gutted factory and nearby establishment with the message “Sweatshop ito: NAKAMAMATAY!” The action was part of PM’s campaign to seek justice for the Kentex workers and demand labor reforms.

“Employer groups have been deafeningly silent on Kentex in contrast to their noisy opposition to wage hike demands. We dare them to denounce Kentex for its violations of workplace safety and labor standards. We call on them to support calls for criminalization of breach of occupational safety and health,” Miranda argued.

She noted that the recent statement by Employer Confederation of the Philippines that it does not condone labor law violations and it supports penalizing Kentex if found guilty is “too little, too late given the concrete facts that have been uncovered about the sweatshop conditions at the factory.”

PM is demanding that business groups spell out detailed mechanisms for self-regulation among it employer members to ensure compliance with labor rights and standards.

Miranda explained that “Even big companies and multinational corporations, which are generally compliant with the minimum standards set by law, benefit from sweatshop labor because small companies are subcontractors in their supply chains. For example, global garment brands even employ homeworkers toiling under the exploitative piece rate system not as direct employees but as laborers in layers upon layers of subcontracting arrangements. No wonder the business sector is quiet and absent in the outrage over Kentex since the capitalist class benefit as a whole from sweatshop labor.”
Posted by Juan Manggagawa at 7:51:00 AM