PALEA gets backing of Occupy protesters 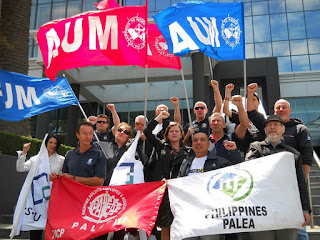 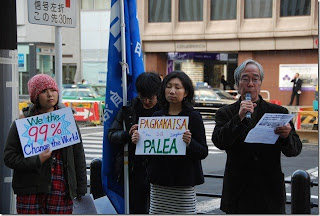 Just as truck drivers and longshore workers got the support of Occupy rallyists in the US, the Philippine Airlines Employees’ Association (PALEA) received the solidarity of Occupy protesters in Canada. Occupy Toronto activists together with Canadian airline unions held a solidarity action at the Toronto international airport last December 10. Last Tuesday various ports along the West Coast such as Oakland, Los Angeles and Portland were shutdown by community pickets of Occupy protesters with the support of port workers who refused to cross the picketlines. As is the practice in Occupy protests, the Toronto rally was called a “general assembly” and speeches were “echoed” by the participants.

The series of solidarity actions for PALEA continued with a picket at the Tokyo office of Philippine Airlines (PAL) by Japanese railway workers last December 12. On December 14 another rally was held at the Philippine consulate in Melbourne that was attended by PALEA vice president Alnem Pretencio, the head of the two million-strong Australian Council of Trade Unions Geraldine Kearney and leaders of the Australian Services Union which represents airline workers including Qantas, Maritime Union of Australia, Victorian Trades Hall Council and Australia Asia Worker Links.

Gerry Rivera, PALEA president and vice chair of the Partido ng Manggagawa, said that “We salute the Occupy shutdown of the West Coast ports to demand justice for truck drivers and longshore workers. The fight for better pay, job security and union rights is a common struggle of port workers, airline employees and workers around the world. PALEA stands shoulder to shoulder with Occupy protesters.”

Renato Magtubo, chair of PM and co-chair of the Church-Labor Conference, declared that “The latest rallies in support of PALEA are a level up from earlier actions since the call for a boycott of Lucio Tan-owned PAL and Air Philippines are explicitly expressed. The widespread boycott campaign will hurt PAL since the regional flights to Australia and Japan, and the transpacific flights to the US are among its most profitable operations.” He added that “The fact that PAL is having a promo during the Christmas peak season belies its claims that its operations are back to normal.”

Rivera claimed that “The convergence between the youth-led Occupy protests and the workers struggles for wages, jobs and rights is a welcome development. Social change will come from the unity and action of the 99%.”

For a video of the Toronto action: http://www.youtube.com/watch?v=ZV8lFtTCo7Q