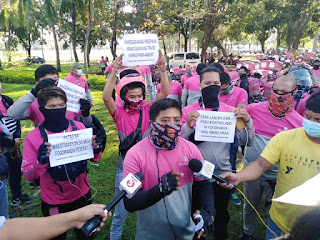 Some 700 riders of the food delivery app Foodpanda held a “unity ride” today to seek redress of their grievances. However the peaceful protest at the Department of Labor and Employment (DOLE) was marred by an altercation with police from the Intramuros station. Jack Vergara of the Food Panda Riders Association was arrested while the cellphone of Romeo Maglunsod of the Kapatiran sa Dalawang Gulong (KAGULONG) was confiscated by the police.

“We condemn the harassment by the Manila police of a peaceful concerted action by workers that is a constitutionally guaranteed right. We ask Labor Secretary Silvestre Bello to ensure that workers’ right to redress of grievances is observed at the DOLE area. That is traditionally a site of protest but police are now using the pandemic as an excuse to suppress the right to peaceful assembly,” stated Rene Magtubo, national chair of Partido Manggagawa which is supporting the Foodpanda riders.

The Foodpanda riders assembled at the Film Center/Cultural Center of the Philippines area before proceeding to the DOLE to seek an audience and deliver a letter addressed to Labor Secretary Silvestre Bello.

The groups are asking the DOLE to conduct an inspection for the purpose of resolving the grievances of the Foodpanda riders. Riders are discontented over recent changes in Foodpanda policies that have negatively affected their pay and working conditions.

“Pay is tied to bookings which are affected by so-called ‘grades.’ But the grading system is opaque. Grades have fallen due to changes in the system which penalize riders. Pay has also been reduced per delivery due to a new system,” explained Don Pangan of KAGULONG.

Further, a policy called “undispatch” forces riders to rush in order to pick up an order, thereby putting their safety at peril. The groups are demanding the removal of “undispatch,” and transparency and fairness in policies, including the computation of the pay for deliveries.

The groups are calling on the DOLE to act on their request for dialogue and inspection. “This is only the start of our advocacy for the rights and welfare of Foodpanda rider and other gig workers. Ang laban ng Foodpanda riders ay laban ng lahat ng gig workers,” insisted Pangan.