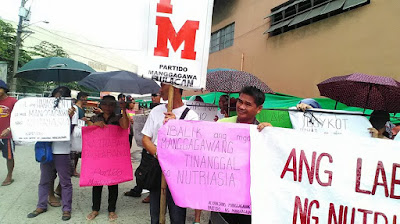 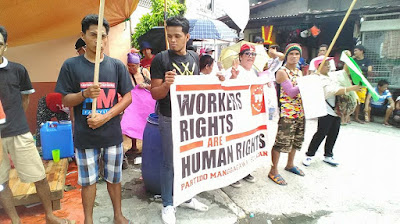 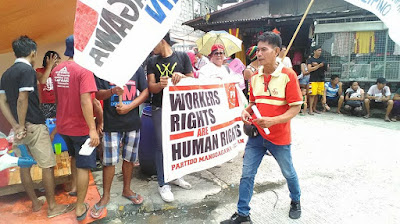 Some 200 workers marched this afternoon in Marilao to the strikebound condiments factory NutriAsia. Members of the Bulacan chapter of Partido Manggagawa (PM), Alyansa ng Maralitang Pilipino, the Bulacan Motorcycle Riders Confederation and a newly established labor group, Kapatiran ng mga Unyon at Samahang Manggagawa, condemned the violent dispersal of the picketline of striking workers last week. Scores of strikers were arrested and several more were wounded as police enforced a court order against the picketline.

“The dispersal of the NutriAsia picketline exposes the double standard of the so-called justice system and also of the present administration. A court order to allow free ingress and egress at the factory is forcibly enforced while a DOLE order to regularize workers remains unimplemented. We have an administration that promised to end endo yet police violence is inflicted upon workers fighting against contractualization,” averred Gerry Rivera, head of the Kapatiran.

The group is calling on the public to boycott products made at the factory until the workers’ demands for regularization is met. NutriAsia manufactures Datu Puti, Silver Swan, UFC Ketchup and Mang Tomas among others.

Kapatiran was formed by several unions and workers associations as a “solidarity space” for unaffiliated and federated organizations. It aims to complement ongoing labor unity efforts even as it plans to campaign for urgent labor reforms.

“We call on the police to observe the DOLE-PEZA-PNP Guidelines on the Conduct of Security Personnel During Labor Disputes. Police are not allowed to escort scabs into a strikebound factory and they should maintain a 50 meter distance from the picketline,” argued Ver Estorosas, chair of the PM-Bulacan.

Rivera called on the labor movement to close ranks in solidarity with the workers of NutriAsia and other labor struggles. He recalled that another workers strike in the Cavite export processing zone in Rosario was also harassed by security guards.

“Solidarity among workers is necessary to defend the right to peaceful concerted actions, including strike and advance the campaign against endo,” argued Rivera. Rivera is also union president of the Philippine Airlines Employees Association (PALEA) which has waged a bitter struggle against contractualization at the national flag carrier. PALEA and Kapatiran are calling on the DOLE to expedite the release of the results of a labor inspection of PAL and its sister company PAL Express.