Quo warranto vs Sereno was a political coup 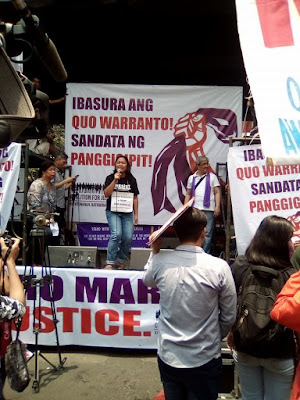 The decision of the Supreme Court to remove Chief Justice Maria Lourdes Sereno can never be considered as a triumph of justice. It’s purely a result of a political coup organized from both the outside and inside of the country’s deteriorating state of institutions.

Sereno was clearly ousted not because of her missing SALNs but mainly because of her missing loyalty to the Chief Executive.  And while the quo warranto was effectively used only as a means to achieve the end of administratively ousting the Chief Justice, it’s the political side of it that’s more intimidating as far as the whole nation is concerned.  It’s not really the quo warranto proceedings, we believe, that has become a threat to the SC itself as an institution.  Rather, it’s the majority vote that is worth watching as this number has already become a political trend in itself.

The recent decision on former CJ Sereno provides a preview of what’s going to be the next big things this ruling majority will do or undo in this increasingly becoming confused and supressed nation.