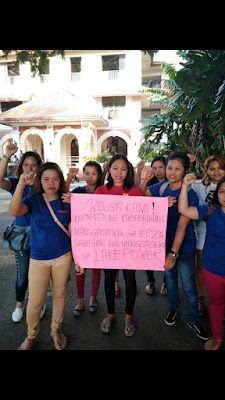 The women workers of an electronics factory in Cavite walked off their jobs this afternoon as a make-or-break meeting between management and the union ended without an agreement. The workers of Lakepower Converter Inc., located at the Cavite Economic Zone, declared a strike due to union busting and unfair labor practices of the company.

“We tried for more than a week to resolve the issues of illegal termination and suspension of unionists and other discriminatory acts against workers but management was not willing to settle the grievances in good faith. Thus we have no choice but to go on strike,” declared Mercy Tanginan, president of the Samahan ng Manggagawa sa Lakepower Converter Inc.

She explained that “We demand a permanent stop to the harassment and discrimination of unionists. The pending termination of six unionists and suspension of other officers and members must be totally scrapped. Workers’ grievances must be settled.”

Unrest has festered at Lakepower for the last few months. Among workers grievances is the removal of the door of the women’s restroom so that the company can spy on workers. Almost all of the 200 workers in the factory are women. They are also outraged at the unreasonable limits on the use of the restroom which has led to cases of workers suffering from urinary tract infection. Workers are also complaining of excessive quota and the exclusion of unionists from receiving Christmas packages.

Last November 16, the Lakepower workers held a protest at the Cavite ecozone against company abuses. The protest was the third such picket over the last month at the country’s biggest export processing zone. Earlier, garments workers held protest actions against “factory shutdown-cum-union busting.” After two protests and a strike threat, the union leaders at the Korean-owned garments factory Sein Together Phils. Inc. were eventually accepted back to work.

“Workers are unionizing to improve their working conditions but are being met by extreme interference from capitalists unwilling to share the fruits of production,” asserted Rene Magtubo, PM national chair.