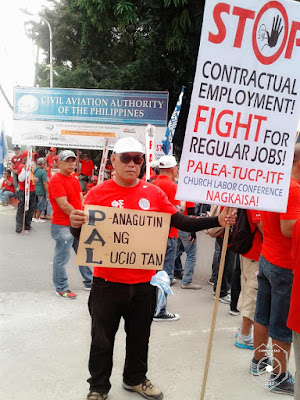 After arrears settled to gov’t:
PAL asked to pay debts to outsourced workers

With Philippine Airlines (PAL) settling yesterday its arrears to the government amounting to some P6 billion, the the union Philippine Airlines Employees Association (PALEA) called on the national flag carrier to likewise pay its debt to its outsourced workers. PALEA is demanding that PAL implement the settlement agreement forged in 2013 to end the long-running dispute and reinstate some 600 outsourced workers.

Gerry Rivera, PALEA president and vice chair of the militant Partido Manggagawa, said that “PALEA is calling on President Duterte to ask Lucio Tan and PAL to likewise fulfill their obligation to some 600 retrenched PAL workers who have yet to be reinstated as regular workers according to the terms of a settlement agreement forged in 2013 to resolve the outsourcing dispute. President Duterte is aware of this as it was brought to his attention in a dialogue with labor groups at Malacanang last February 27.”

President Rodrigo Duterte had assailed Lucio Tan-owned PAL for failing to pay CAAP for its debts on the use of airport facilities. Last October 4, PALEA held a picket at office of the Civil Aviation Administration of the Philippines (CAAP) to ask Philippine Airlines (PAL) to pay its debts to the government and its workers. In the picket, PALEA members held placards that read “PAL singilin sa utang sa gobyerno. Panagutin din sa pagkakasala sa obrero,” “Bayaran ang utang. Ibalik sa trabaho ang manggagawang tinanggal” and “Reinstate the PALEA 600.”

PALEA is also calling on the Department of Labor and Employment to release the findings of its inspection of PAL, its sister company PAL Express and the 27 agencies contracted in their operations. A similar inspection of telecom company PLDT led to an order to regularize nearly 9,000 agency workers.

“We are confident that simlar to PLDT, PAL and PAL Express will also be found gulity of illegal labor-only contracting and thus be ordered to regularize its thousands of agency workers and reinstate the PALEA 600,” Rivera argued.

Yesterday, various labor and church groups, including PALEA and PM, met at the Arzobispado de Manila in Intramuros to assess the ongoing campaign against contractualization and vowed to push the administration of President Duterte to make good on its promise to end endo. Manila Auxiliary Bishop Broderick Pabillo reiterated the support of the Catholic Church to the fight of workers for regular jobs, including the reinstatement of the PALEA 600.