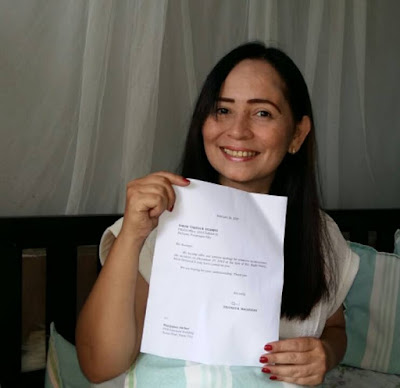 Sandra Cam’s impending appointment to the President’s cabinet should not only be reconsidered, the dignity of both the MIAA employee and her manager should likewise be restored, according to labor group Partido Manggagawa (PM).

Cam reportedly made a show by threatening people, dropping names and arrogating imminent power at the airport’s VIP lounge, particularly against a MIAA employee and his/her manager.

“If accounts in news reports were true, then the injured parties particularly the MIAA employee and the manager should file appropriate charges against this narcissistic whistle-blower,” said PM Secretary General, Judy Ann Miranda.
Miranda added: “Workers are trained to abide with established protocols in the workplace. They were not hired to suffer indignity from powers-that-be or worse, from a VIP wannabe.”

PM disclosed that last February, a member of the Philippine Airlines Employees Association, Ms. Sarah-Bonnin Ocampo won a favorable settlement of a case of slander and serious misconduct against former AVE Partylist Rep. Eulogio Magsaysay.  The ex-congressman was forced to make a formal apology as resolution of the case with Ocampo before a municipal trial court in Pasay.
The case stemmed from a 2011 incident where Ocampo, PAL’s customer representative during that time at the check-in counter, was berated and offensively called a ‘menopausal bitch’ by the congressman after she refused to grant the latter’s request based on company protocols.

PM welcomed the settlement as a victory for labor and women's rights and a cause for celebration during the obeservance of women's month. "Even more, this resolution sets a precendent and warning against erring government officials or abusive customers against verbally abusing workers who are just doing their job," Miranda explained.

For others the Magsaysay-Ocampo case was ‘too small a thing’ to warrant court action or public attention. But for women activists in the labor movement, any misuse or abuse of power which either arise from the use of brute force by the mighty or from the blind acceptance of the weak should be opposed.

“In the case of Sandra Cam, it is the exploitation of non-existent power against the lowly airport workers.  She can be more dangerous with an official ID from Malacanang,” concluded Miranda.

Good job to support thi ls employee against this government official wannabe Sandra SCam. Employee and workers deserves respect from everyone, regardless of anyone connected to Bong Go and his lord D. Once again this awful braggart woman displayed her arrogance, self importance and lack of credibility.

why should she be appointed in the first place...? i know there are a lot of people out there who could qualify for any government post...give the president a free hand to place the right persons in the right place...!

It's this kind of power tripping that sets the country's politics apart from other democracies. Do this in the US and you're civilly liable for millions of dollars nor will you even make it to a list of nominees of cabinet appointees. I can't imagine what abuses she will do given power. While her advocacy as whistleblower is commendable her character should lend credence to her organization.

We should continue to bring into very bright lights this kind of unpardonably bad behavior of people identified with the equally arrogant president. Despite the possibility that this issue will just be swept under the rug like so many examples this administration has condoned. Her poor excuse and lies of being the victim here and her unapolegetic insistence that she had the right to do what she did during a phone interview with CNN's Pinky Webb belies her true nature as an ego tripping imeldific megalomaniac. Pwe! I shudder to think and pity the many who may possibly cross her should she be given, God forbid, a cabinet appointment. For this reason I would have to remain anonymous.

virtual accountant is the best way to opt for an assistant without any issues. The virtual accounting services helps in keeping a track of the accounts. Visit our website to know more about us. marhabareception.com